NEW DELHI, INDIA (24 April, 2018) — AECOM, a premier, fully integrated global infrastructure firm, and Asia Society, a leading global nonprofit institution, launched the second year in their three-year global conversation series, “Imagine 2060: Delivering Tomorrow’s Cities Together,” in Delhi, India. Today’s forum, “Imagine Delhi: Towards a Clear Sky,” opened the series’ 2018 program on air, with a diverse line-up of leading international and national leaders in business, research, policy and media, who explored solutions to achieve a better trajectory for the future economic and environmental health of the Indian capital, as well as other fast growing megacities around the world.

Launched in 2017, this original series aims to inspire a new way of delivering tomorrow’s cities. Each year, the series is dedicated to a key Earth element: water, air and land. Last year focused on the theme of water, surveying how the diverse paths taken by five global waterfront cities – Manila, Sydney, Los Angeles, New York and Hong Kong – are shaping the quality of life for citizens in radically different ways and providing valuable lessons for other cities.

With a population forecast to grow to 28 million during this year, Delhi was selected for the inaugural conversation in the 2018 program. India’s capital has just been categorized as a “megahub” among other Emerging World Cities by the “Universe of City Indices 2018,” acknowledging its increasing importance as an international center of capital and culture. Yet, like many other megacities, Delhi’s rapid growth also comes with formidable challenges, such as air pollution. With the World Health Organization estimating that 92 percent of Earth’s current population now inhabit places where air quality does not meet minimum safety guidelines, the 2018 conversation in the Imagine 2060 series is under the theme of “Towards a Clear Sky.” It will raise a positive, forward-looking conversation about the holistic strategies and choices that can achieve the clear sky and clean air necessary for sustained economic, social and environmental health.

“Whether Singapore or Delhi, we all share the same sky and that’s why enriching conversations like those held today are so important. Delhi’s future rests upon achieving the right balance between growth and sustainability. Singapore and India are old friends, and I’m certain Singapore will be willing to play a meaningful role in building the sustainable policies, practices and initiatives to help India achieve its objective of clear skies in the years ahead,” said Emeritus Senior Minister of the Republic of Singapore Goh Chok Tong, who delivered the first of two keynote addresses.

In his opening remarks on behalf of AECOM, Mr. Chiao, an internationally renowned expert on urbanization who conceptualized the Imagine 2060 program with Asia Society’s global leadership, said, “Our 2018 theme, Towards a Clear Sky, does not just look at the policies that can be put in place to restore the harmony between city development and air quality. We are gathering together leaders in renewable energy, urban planning, transportation and public policy to imagine a sustainable future holistically for these iconic cities and join forces to achieve this collaboratively. It is critical that we stretch our imagination far beyond now, to anticipate and deliver the built environment that will enable us to survive, and thrive, in the future.”

Mr. Avinash Misra, Chief Executive, India, AECOM, said, “By 2060, India’s population could be as many as 1.8 billion people, making us the highest populated nation, so we really need to make choices now that look ahead to how we will sustain our citizens into the future, and collaborate on integrated and best practice approaches that deliver lasting solutions for all cities across India. Initiatives such as Vizag Smart City, for which AECOM is providing the masterplan and sector specific smart infrastructure, will be transformative for their communities, as well as great templates for other cities.”

“We’re delighted Delhi was chosen for the launch of the second year of the Asia Society – AECOM partnership. India has made significant strides in the fight against challenges such as air pollution because policymakers, industry, civil society and citizens are coming together to tackle this challenge. The choices we make today will have significant impact upon generations to come. Let’s make sure those choices have a lasting, positive and sustainable impact! Asia Society India Centre is committed to facilitating positive change through its programming. We’re going to further this conversation beyond today and hopefully, towards those solutions we all seek,” concluded Ms. Chand.

Following today’s launch in Delhi, the series will hold events later this year in Melbourne, Australia and then Hong Kong, China. 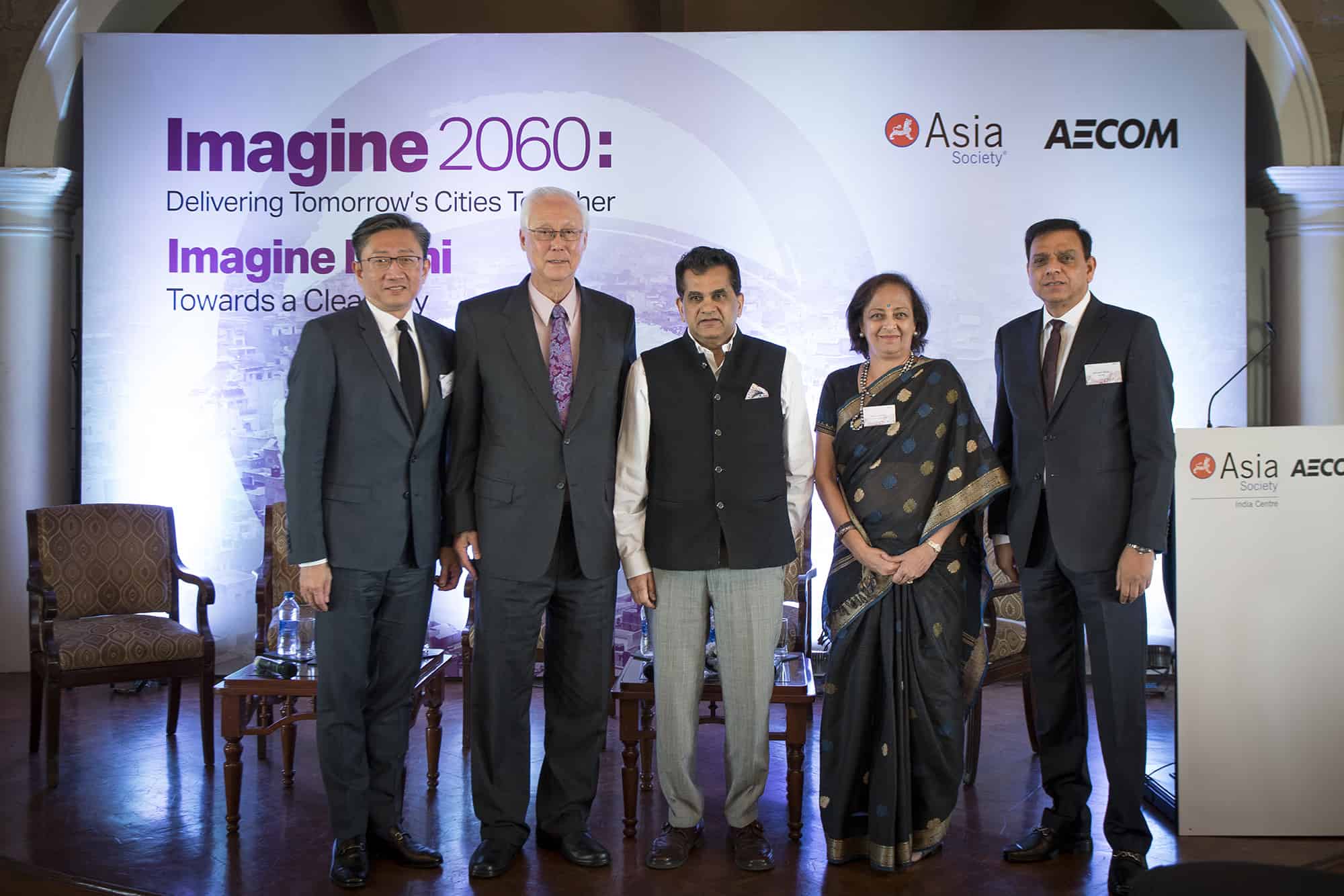 About Asia Society
Founded in 1956 by John D. Rockefeller 3rd, Asia Society is a nonpartisan, nonprofit organization that works to address a range of challenges facing Asia and the rest of the world. Asia Society has cultural centers and public buildings in New York, Hong Kong, and Houston, and offices in Los Angeles, Tokyo, Manila, Mumbai, Tokyo, San Francisco, Seoul, Shanghai, Sydney, Washington, D.C., and Zurich. Across the fields of arts, business, culture, education, and policy, Asia Society provides insight, generates ideas, and promotes collaboration between Asia and the world.

About Asia Society India Centre
Asia Society India Centre was established in 2006 in Mumbai, and inaugurated by Prime Minister Dr. Manmohan Singh. It is the leading educational organization dedicated to promoting mutual understanding and strengthening partnerships among peoples, leaders and institutions of Asia, between the countries of Asia and the United States. Over the 12 years, the India Centre has held over 600 programs across diverse areas and formats including conferences, roundtables, public lectures, and cultural performances. The Asia Society India Centre works in the areas of business & policy and arts & culture, using creative formats to present cross-disciplinary perspectives, fresh insights, informed ideas with diverse speakers, and always an independent, non-partisan view on Asian and World affairs. Through dialogue with leaders, thinkers, and citizens, we explore vital issues facing Asia on the global stage, to create awareness and effect change. See our work over the years at asiasociety.org/india and @AsiaSocietyIC.