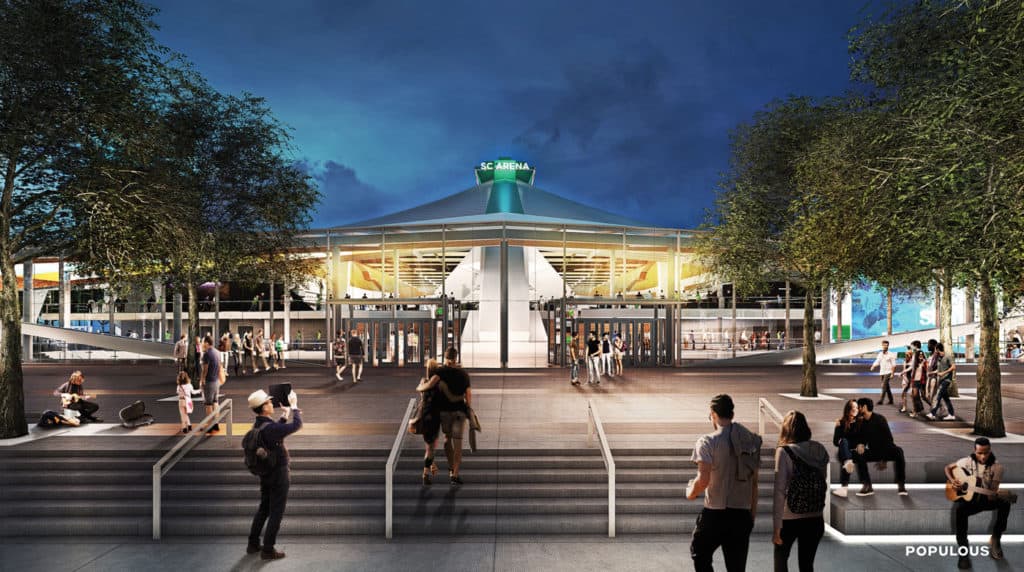 SEATTLE – JULY 31, 2018 – OVG-Seattle and NHL Seattle today announced Skanska-Hunt, a joint venture between Skanska and AECOM Hunt, as general contractor for the redevelopment of the Seattle Center Arena. Together the project team is set to begin construction on the largest private investment in the history of Pacific Northwest sports and entertainment. Skanska-Hunt joins project partners including, CAA ICON (developer representative and project manager), Populous (architect) and Labor Partners.

Construction is slated to start in the fall of 2018. The project team continues to work in close partnership with the City of Seattle to complete the necessary permitting and approval processes.

“Today’s announcement adding Skanska-Hunt to this world-class project team is just another step in a defining moment for our city as we continue to move toward the resurgence of the Seattle Center,” said Tod Leiweke, President & CEO, Seattle Hockey Partners. “Visitors for the sports and entertainment events are going to be treated with a venue that not only honors the history of the arena, but also provides the latest in arena and fan engagement technology. No matter if you’re here to see the Seattle Storm, a hockey game or a concert, the new Seattle Center Arena will deliver amazing fan experiences.”

Skanska is a global construction firm with more than four decades of experience building inspiring sports and entertainment venues including MetLife Stadium, University of Portland Beauchamp Recreation Center and University of Kentucky Commonwealth Stadium expansion/renovation, among many others.

“The Skanska-Hunt team is incredibly excited to join the team for this iconic project,” said Skanska Executive Vice President – General Manager, Kevin McCain. “We believe that this is more than just a redevelopment of Seattle Center Arena and will become a world–class urban arena that will serve the Seattle area and its diverse communities. We take great pride in the opportunity and look forward to partnering with this team to produce a one of a kind facility for generations to come.”

The redeveloped and reimagined Seattle Center Arena will honor the history of the building, while also engaging cutting-edge engineering techniques to deliver a building that will provide the best setting for hockey, basketball, concerts and other entertainment events. When complete, the new arena will be feature an interior of up to 750,000 sq. ft., almost double its current size. The new arena will also meet LEED standards and preserve the current historic and iconic roofline.

The new Seattle Center Arena is the largest private investment in Pacific Northwest sports and entertainment history and the project team of experts in sports and entertainment venue development will make it the ultimate urban arena. The arena will hold over 140 events per year, with a goal of becoming one of the top 10 music venues in the country.

“The Seattle Center Arena project will deliver a new, modern entertainment venue to the city and enhance the urban character and heritage of Seattle Center,” said Tim Romani, CEO, CAA ICON. “We are thrilled to partner with OVG on this iconic project and to guide the talented project teams from Populous and Skanska-Hunt.”

“The redevelopment is focused on creating a home for a variety of events that will appeal to an entire cross section of the Seattle community. It is designed specifically for each and everyone,” said Chris Carver, Principal in Charge, Populous. “For fans, this means providing a myriad of seating options and a redesigned seating bowl with strong sightlines for hockey, basketball, concerts and more to truly become a place where people love to be together.”

“The Seattle Center Arena is a perfect example of what happens when labor and the City work together to build our community. This project will create fresh public places to enjoy and thousands of family-wage, union jobs and that’s something we can all be proud of,” said Nicole Grant, Executive Secretary- Treasurer of MLK Labor.

About OVG-Seattle and NHL Seattle
OVG-Seattle, the local office of Oak View Group leading the redevelopment of the Seattle Center Arena. NHL Seattle is helping to guide the construction process to transform the space into an ultimate urban arena to host future NHL, NBA, WNBA, music and other entertainment events.

About CAA ICON
A division of leading entertainment and sports agency Creative Artists Agency (CAA), CAA ICON is the
world’s-leading owners representative and strategic management consulting firm for public and private sports and entertainment facility owners/operators, professional franchises, and leagues. With more than 50 sports, entertainment, and public assembly projects and over 1,000 consulting engagements, CAA ICON has managed the development of many of the most successful venues around the world, spanning 11 professional sports leagues, totaling nearly $20 billion. CAA ICON offers world-class service in the areas of project management, strategic advisory, feasibility and planning, and beyond. For more information visit www.caaicon.com.

About Populous
Populous is a global architecture and design firm that designs the places where people love to be together, like Yankee Stadium, the London Olympics, and the Super Bowl. Over the last 35 years, the firm has designed more than 2,500 projects worth $40 billion across emerging and established markets. Populous’ comprehensive services include architecture, interior design, event planning and overlay, branded environments, wayfinding and graphics, planning and urban design, landscape architecture, aviation and transport design, hotels and hospitality, and sustainable design consulting. Populous has 14 offices on four continents with regional centers in Kansas City, London and Brisbane.
For more information visit www.populous.com or follow @Populous on Twitter.

About Skanska
Skanska USA is one of the largest, most financially sound construction and development companies in the U.S., serving a broad range of clients including those in transportation, power, industrial, water/wastewater, healthcare, education, sports, data centers, government, aviation, life sciences and commercial. Headquartered in New York with offices in 29 metro areas, we have nearly 11,000 employees committed to being leaders in safety, project execution, sustainability, ethics and people development. In 2017, our work in building construction, civil and power/industrial construction, commercial development and infrastructure development (public-private partnerships) generated $7.3 billion in revenue. Global revenue of parent company Skanska AB, headquartered in Stockholm and listed on the Stockholm Stock Exchange, totaled $18.8 billion in 2017. Skanska shares are publicly traded in the U.S. on the OTC market under the symbol SKBSY through a Level I American Depository Receipt program.

About AECOM Hunt
From iconic stadiums and arenas, next-gen transportation hubs and sustainable healthcare and academic buildings, we are known nationwide as the premier builder of large and multi-faceted projects. As part of AECOM (NYSE:ACM), a fully integrated global infrastructure firm with offices in more than 150 countries, we connect knowledge and experience across a global network of experts to help clients solve their most complex challenges. A Fortune 500 firm, AECOM had revenue of approximately $18.2 billion during fiscal year 2017. See how we deliver what others can only imagine at aecom.com and @AECOM.

About MLK Labor
MLK Labor, AFL-CIO, is the central body of labor organizations in King County, Washington.
We represent more than 150 unions and 100,000 workers. United, we are a voice for the interests and needs of working people in King County.