19 October 2016 – The first phase of a major international project to deliver state-of-the-art university campuses in Central Asian mountain communities was celebrated today with the inauguration of the University of Central Asia (UCA) Campus in Naryn, Kyrgyz Republic. The occasion was commemorated by senior leadership of the Kyrgyz Government and His Highness the Aga Khan.

The first fully residential undergraduate university in the remote region, UCA was established to increase access to an internationally recognised standard of higher education in Central Asia and drive development in the region’s mountain societies. It is part of the Aga Khan Development Network (AKDN). 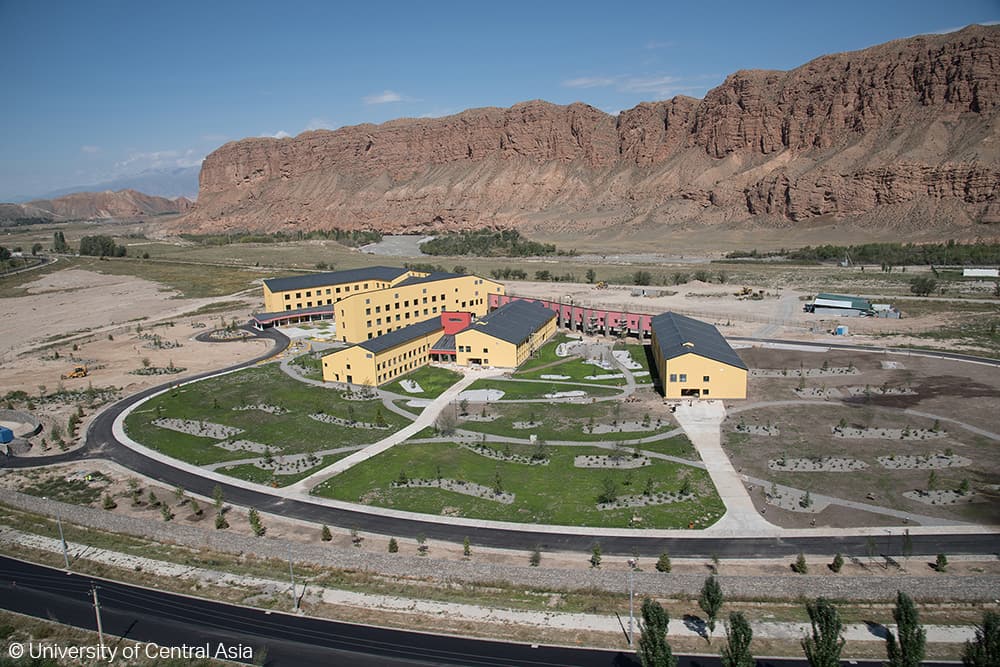 AECOM has been involved with UCA since 2012, delivering a range of multidisciplinary services including masterplanning, landscape design, civil, structural and MEP engineering, as well as specialist disciplines such as geotechnical, hydrogeology, transportation, security, acoustics, fire engineering, IT/audio visual and lighting design services. Award-winning Japanese architect Arata Isozaki developed the original design for UCA’s three planned campuses in Naryn, Kyrgyz Republic, Khorog, Tajikistan, and Tekeli, Kazakhstan, under the University’s initial single-phase construction plan. The University has since transitioned to a multi-phase construction approach to allow for greater flexibility and minimise the need for retrofitting as the campus grows.

Phase one of the project includes a new academic building with a library, dining hall, laboratories, classrooms and faculty housing, as well as student dormitories. AECOM engaged Gensler for the architectural and interior design and Serbian consultancy Dizajn Arhitektura for the detailed design and local permitting services. 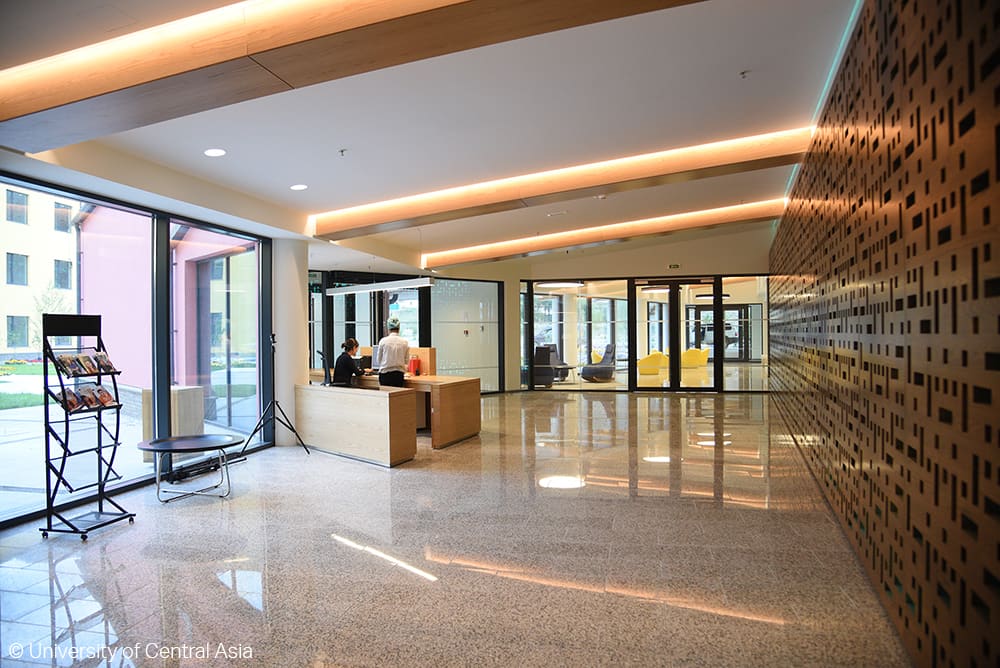 Design and construction of the Naryn Campus presented a number of technical challenges that required innovative engineering solutions. The campus is located in a highly seismic area, with several active fault lines running through the site. AECOM reworked the project’s original masterplan, referring to detailed geological information and seismic hazard maps. The winter’s harsh sub-zero climate also posed a challenge to the construction team, particularly when forming the concrete structure of the building.

Naryn is a remote city separated from the rest of the Kyrgyz Republic by high mountain ranges. Situated along the historic Silk Road, it is a four-hour drive from the country’s capital city of Bishkek and has limited infrastructure and utilities. During the winter months, Naryn’s residents resort to burning coal or dried animal waste for heat. Given Naryn’s extreme temperatures, which range from below -30 degrees Celsius in the winter months to higher than 30 degrees Celsius in the summer, providing a secure and sustainable supply of energy was a major challenge. The AECOM team developed an innovative ground source heating and cooling system, which uses the aquifer beneath the campus as a low-grade energy source. The system provides enough energy to heat and cool the academic building, while also providing hot water to the entire campus. The heating and cooling system significantly reduces the facility’s impact on the local electrical network.

“This project is about much more than creating a world-class university campus; it is about giving people from isolated mountain communities their first real opportunity to access an international standard of university education at a residential campus. The remoteness and harsh temperatures of Naryn have necessitated the development of robust engineering solutions, which provide the university’s students and staff with a safe, resilient environment in which to learn,” said Michael Stimpson, Associate Director of Building Engineering at AECOM.

Engaging with the surrounding community was an important aspect of the project. AECOM’s team visited local schools in Naryn to give presentations to students on subjects related to the evolving design of the campus, such as civil and structural engineering and landscape design. This initiative is part of UCA’s broader commitment to boosting local economies and developing host mountain towns into vibrant university communities.

“At UCA we have approached the construction of our physical campuses in the same spirit in which we are building our institution: by engaging expert partners, adhering to the highest international standards and remaining faithful to a bold, perhaps even audacious founding vision,” explained Grant Robertson, Director of Construction and Facilities at the University of Central Asia.

“AECOM’s creative solutions and careful consideration of how members of the University community will live, learn and work in this space helped ensure that the inaugural campus reflects both the vision of Isosaki and the core values of UCA,” said Robertson.

Maja Nesdale, lead architect at Gensler, added: “Our approach was to utilise both nature and technology in the designs to create highly immersive learning and student environments coupled with modest and comfortable living areas. The resulting designs for the academic areas of the first phase support many modes of learning and allow for incidental interactions between both student and staff, harnessing the latest trends in the world of education.” 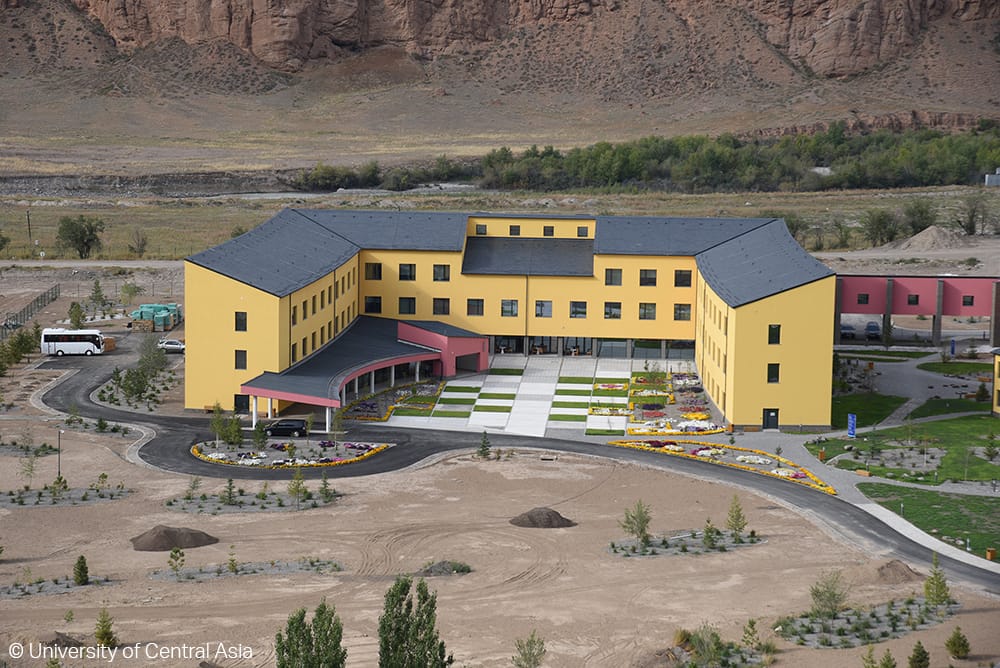 The secular, internationally chartered and not-for-profit University is a partnership between the governments of Kazakhstan, the Kyrgyz Republic and Tajikistan and the Aga Khan Development Network (AKDN). Founded in 2000, UCA’s mission is to foster socio-economic development in central Asia, particularly in its mountain societies.

The facility is the first of three UCA undergraduate campuses to open in the region. The campus in Khorog, Tajikistan is scheduled to open in 2017, followed by Tekeli, Kazakhstan, anticipated in 2019. The University welcomed 71 undergraduates from the University’s three founding countries and the broader catchment area of Afghanistan and Pakistan to Naryn on 5 September 2016. 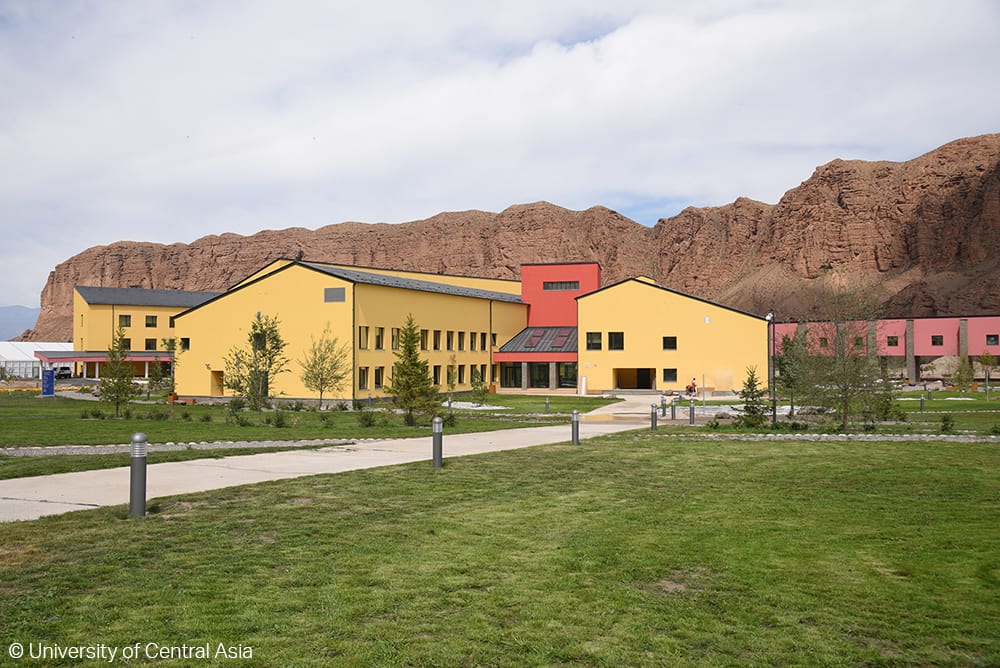