The result of the British referendum on EU membership was a surprise that few anticipated with effects being felt throughout the Eurozone and beyond. The victory of the leave campaign led to the resignation of the prime-minister in the United Kingdom and to a sudden drop in the value of the currency and stock market.

In the weeks that followed, property transactions were halted as investors’ renegotiated deals or pulled out altogether. A pause was inevitable amidst a shock that was political rather than economic. A few deals did go through albeit at reduced prices and shielded deal structures.

As the dust settles, it is becoming increasingly clear that the impact was less than feared and that markets have weathered the political uncertainty with surprising resilience. Since the referendum, financial markets have generally recovered and volatility has diminished.

The long-term outlook for the market is unclear and caution remains as there is still considerable uncertainty over the process by which the UK might leave the EU, and the implications of this. However, the rebound seems to indicate that the impact is unlikely to be enough to fundamentally change the underlying positive significantly of property markets in the United Kingdom and throughout the Eurozone.

The UK economy is in a fairly resilient shape. A new government is already in place and the central bank has provided several stimulus measures. The dip in currency should provide support to exports and has helped attract inward investment. In Europe, monetary policy and an improving labour market should continue to support its economy.

Economic conditions are expected to improve once uncertainty subsides. A downturn is expected with a gradual upturn resuming from 2018 onwards. Thereafter, growth is expected to resume as supply shortages should continue to cause prices to rise faster than earnings.

Whereas the investment market has seen a shift from panic to greater confidence as time has passed, the occupier market has seen a different dynamic. The forecast from the real estate industry is positive given the levels of activity and transaction volumes which point to a general level of confidence in the economy.

There is a solid underpinning of global appetite for yield and real assets. As a result, property should grow more attractive against competing assets like fixed income and equity supported by monetary policy and a flattening yield curve.

The weakening currency has made real estate more attractive, with the vote adding to the pressure for core investing. While the uncertainty surrounding Brexit will affect investor’s confidence, the market has a wide investor base. With the economic recovery set to continue, property is expected to remain an attractive investment.

A correction in asset pricing is bound to yield attractive investment opportunities. In an environment of heightened uncertainty and more conservative lending the focus is likely to be placed on core asset classes that are considered the most resilient. This creates opportunities for counter-cyclical investment strategies that take advantage of the dislocation in capital markets. 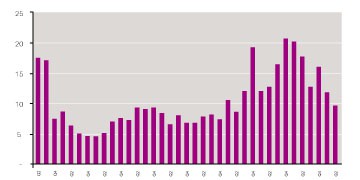 The market was already slowing from the strong double digit growth of recent years. The referendum should accentuate the slowdown. This will put upward pressure on yields and slow rental growth, particularly in the more EU-dependent sectors such as London offices.

London’s office market was affected, but less than expected. London’s financial services have a global focus that is only partially impacted by the vote. The city continues to enjoy several structural advantages in these markets, which will not dissipate.

The referendum vote will delay some activity and the UK is set to be less favoured by some investors and occupiers, with other locations in Europe gaining at its expense. In the short term, the result is more likely to affect activity rather than values with the later supported by limited supply and lower interest rates.

Other European cities will aim to improve their status as financial centres. However it is unlikely that one will emerge. Rather, jobs that will potentially leave London are likely to be dispersed across a number of European cities, with Dublin, Frankfurt, Paris and Amsterdam all likely to benefit.

Lending is likely to be more conservative and costs may rise, resulting in an even more pronounced two tier lending market favouring core opportunities. However pressure will remain for banks to lend, from central banks but also from owners. Banks will likely apply an additional risk premium in their spread when lending to non-core property.

A period of uncertainty with reduced liquidity will bring the stability of long-term equity and debt into greater focus. As banks reduce lending ratios and redirect funds to core properties, the opportunity that appears to elicit agreement amongst observers is for alternative lenders and equity investors to fill the funding gap left in the capital structure.

The mainstream residential sector should continue to offer attractive price growth, as the population continues to grow, regardless of migration and regulatory supply constraints which remain unaddressed. The pause should provide opportunities to acquire development sites for residential projects at attractive land basis.

Furthermore, the residential market is benefitting from structural changes that have been accentuated by Brexit. Uncertainty is expected to impact the willingness to buy, resulting in a fall in transaction volumes. Demand should be pushed into the private rented sector which will increasingly become an attractive alternative for both buyers and institutional investors looking for current income as well as capital appreciation.

Investment in Europe is likely to focus on stabilised assets in core markets, potentially redirecting capital from higher-yielding secondary cities. Core markets may face higher demand across the board as uncertainty and quantitative easing drives buyers and pushes down prime yields.

As a result, pricing may become more attractive in higher growth secondary European markets, which in some cases are already trading above historical average spreads to primary markets, with top-line rent growth forecasted as well. 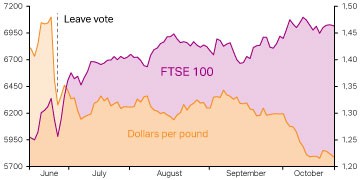 The FTSE 100 has benefitted from the fall in the pound since the Leave vote because the many international companies whose shares are traded in the UK tend to benefit from it.
The FTSE 250 index, however, has lagged behind the FTSE 100 since the Brexit vote because gains from the weaker pound for the outward-looking businesses have been offset by fears about the fortunes of UK-focused companies.”
Source: Bank of England, Financial Times, BBC

Keep calm and carry on

The UK departure from the EU is a multi-year process so it is far too early to write of Brexit as a non-event. The full economic and financial market impacts will only manifest themselves over the coming quarters and years. It remains too early to assess the economic implications.
However, the impact of the vote was mild and many markets have recovered to levels higher than before it took place. Whilst Brexit will continue to bring volatility to the markets, with time, this will reduce. Economic conditions are expected to improve once uncertainty subsides. The main drivers of the recovery should continue to support growth.
The increasing dislocation in capital markets and tightening credit standards have created significant opportunities for investors with development and construction expertise, access to capital, and strong balance sheets. Providing that there is a long-term business plan and sufficient flexibility, the referendum outcome has created the context for deploying capital in long-dated counter-cyclical strategies at attractive risk-adjusted returns.