AECOM E&C UK Ltd, which includes the company’s Warrington office and teams in Whitehaven, Aberdeen and at the Low Level Waste Repository, Sellafield and Dounreay has received a prestigious award in recognition of its achievements in providing a continued safe working environment for its employees and contractors.

The team has achieved an Order of Distinction (19 consecutive Golds) in the internationally-renowned Royal Society for the Prevention of Accidents (RoSPA) Health and Safety Awards, the longest-running industry awards scheme in the UK. The Order of Distinction is one of the highest accolades presented by RoSPA and has been awarded to the AECOM team for achieving the RoSPA gold award for 19 consecutive years. 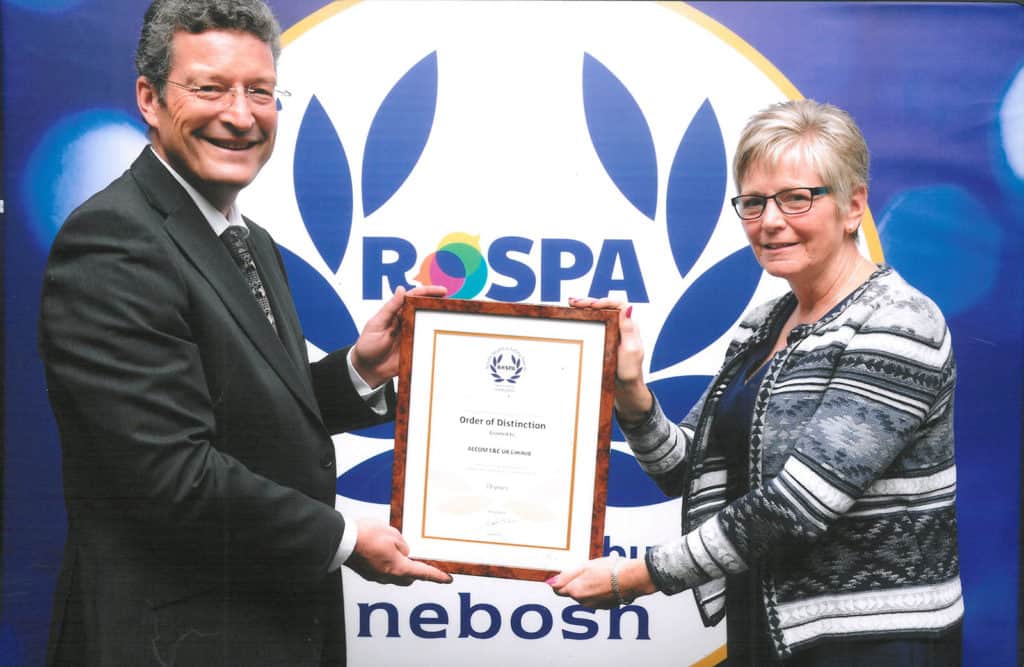 AECOM E&C UK Ltd delivers a range of multidisciplinary services to clients in the nuclear, defence and oil and gas sectors, including the management of operations at complex decommissioning and decontamination sites.

Gerry McGill, Senior Vice President for International Programmes, AECOM, said: “Receiving the RoSPA Order of Distinction not only reflects our team’s commitment to the highest levels of health and safety practices in their day-to-day work, but also their exemplary safety culture that has been integral to operations for almost two decades. Given the complex sites our team is often working at, this award is a particularly worthy accomplishment.

“Such recognition from RoSPA helps reinforce the message that there is nothing more important to our business than seeing everyone home safely at the end of each day.”

The RoSPA Awards scheme, which receives entries from organisations around the world, recognises achievement in health and safety management systems, including practices such as leadership and workforce involvement.

Julia Small, RoSPA’s head of qualifications, awards and events, said: “The RoSPA Awards are the most highly-respected in the health and safety arena, with almost 2,000 entrants every year, and allow organisations to prove excellence in the workplace, demonstrating a commitment to the wellbeing of not only employees but all those who interact with it.”

The majority of awards are non-competitive and mark achievement at merit, bronze, silver and gold levels. Gold medals, president’s awards, orders of distinction and the Patron’s Award are presented to organisations sustaining the high standards of the gold level over consecutive years.

The team were presented with the award during a ceremony at DoubleTree by Hilton Glasgow Central.