Partnering with the Academy, AECOM developed a building design that encompasses an innovative plan for growth in learning and research and development to more effectively address cyber technology.

Leveraging a new operating and speed to market model, Cyberworx will more effectively support public private partnerships in digital and physical research and development, improve the quality of graduating cadets, expand its training of permanent party, collaborate with government policy makers and engage with business partners. The goal is to achieve a unity of effort in developing new products, policies and systems that respond to short, medium- and long-term security threats.

Working closely with Cyberworx leadership, AECOM undertook market testing of physical and digital focus areas to develop a portfolio-based approach to mission streams. A resource driven implementation model was developed that allocates missions to a portfolio area and then defines study, development and response times to interdisciplinary partnership teams. A feedback loop ensures that lessons learned in the mission threads are used to inform subsequent streams.

A model was also developed that aligns growth in enrollment, and training with human resources, research funding and space allocation.

Based on the visioning and strategy work, we developed a robust program and design for a 50,000 SF facility comprising experiential hands on learning space, software and hardware product development labs, partner collaboration and social space. The building is designed to fit within the iconic and historic Mid- Century modern campus, reflecting a contemporary design that respects the heritage of the context.

Several factors drove the design approach for CyberWorx. Among them, the first is transparency. Both literally and figuratively, this is a guiding principle in the governing rules of the Academy which is founded upon concepts of integrity, accountability and a search for truth as represented by Polaris (the North Star), a traditional navigational reference in travel. The next principle is in response to the existing architecture of the Academy, emulating the clear massing and precise grid, while pushing the use of existing materials. Next is the preservation of the iconic character of the Chapel; a singular monument which is distinct from the context should remain a singular iconic structure in the overall campus design without detractors. We elected not to create another competing form on the campus, instead to add to the context with a building that belonged to the architectural fabric of the campus. The next theme used in the design is structured vs. wild– the manicured landscape of the public spaces and architecture is in stark contrast to the natural surroundings. The dynamic topography of the site and the native plants provide a contrast to the rigor of the architecture and the manmade outdoor spaces. The proposed building itself is a backdrop to civic exercises, sitting behind the Parade Field where important milestone events are hosted. Lastly, CyberWorx is an invitation to partnership and collaboration. The building presents its most dramatic face, the cantilever, to industry visitors arriving from the east. 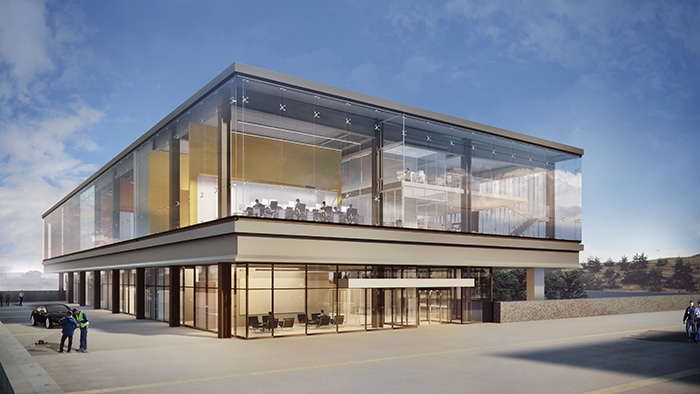 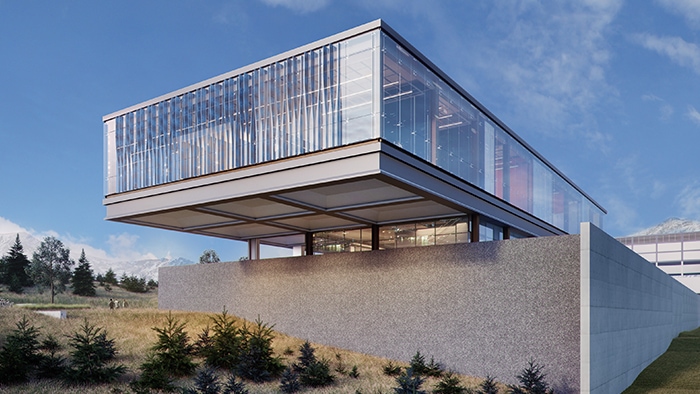