Through the United States Agency for International Development (USAID) funded REPOWER-Kosovo activity, AECOM is supporting the Government of Kosovo’s (GOK) continued efforts to modernize the country’s existing electricity sector by promoting clean energy development and improving private investment within a modern energy sector. The project has two main objectives: promote clean energy and improve the enabling environment for private investment in the energy sector, with gender and youth integrated into all project activities as cross-cutting themes. REPOWER provides support and technical assistance to Kosovo energy organizations, including the Ministry of Economic Development (MED), the Energy Regulatory Office (ERO), the Transmission System and Market Operator (KOSTT) and the Kosovo Energy Corporation (KEK). 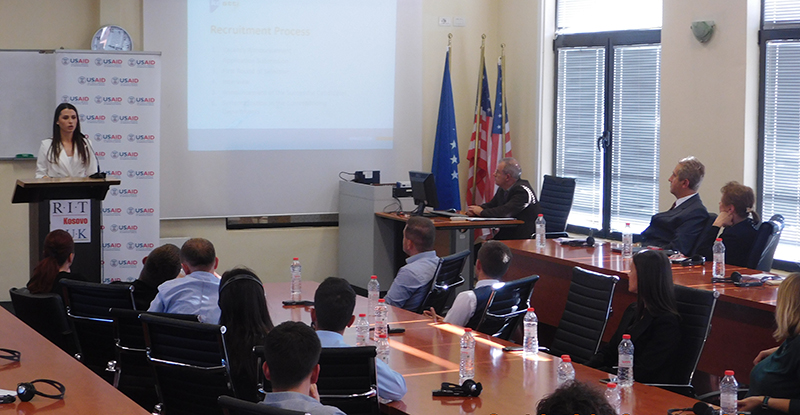 Supported by the United States Agency for International Development’s (USAID), the REPOWER-Kosovo project’s internship program (launched in 2014) provides future energy sector professionals with the opportunity to become more familiar with the business processes within key energy sector institutions.  Through key partnerships, the program is helping to ensure that the expertise of these institutions is carried over to the next generation of professionals. Increasing the attractiveness of the sector to young engineers and other professionals is a cornerstone for the future sustainable development of Kosovo’s energy sector.

Following successful completion of the first three rounds of internships, USAID’s REPOWER-Kosovo project launched a fourth round in partnership with two universities in Pristina—Hasan Pristina University (UP) and RIT Kosovo (AUK). Thirteen students from UP and three from RIT Kosovo (AUK) were selected through a transparent and competitive process. Students were then placed at several institutions, including the Energy Regulatory Office (ERO), Kosovo Transmission System and Market Operator (KOSTT), and Kosovo Energy Corporation (KEK) from April – September 2018.

Within these different institutions, interns gained valuable industry experience by working directly with leading experts.  At KOSTT, interns worked alongside systems and electric engineers supporting interconnection capacity allocation, nomination of contractual programs for parties on the electricity market and market operation auctions.  In support of KEK, interns worked across all divisions including the mining and generation departments, taking part in activities such as assisting in safety preventative measures and preparing regular equipment maintenance needs reports.  While working in the ERO, interns worked on managing the energy supply through tasks such as analyzing factors affecting market prices, developing energy market models, and preparing monitoring reports and additional tariff process-related analyses.  In addition to the technical work, interns gained experience working with the legal and licensing department and learned about challenges facing the energy sector, ensuring Kosovo’s legal and regulatory framework is in compliance with the latest legislative package for the electricity market in the European Union.

Will Trigg, USAID deputy director for economic growth, and representatives of ERO congratulate interns on completion of assignment.

The interns successfully completed their 6 month course and received certificates of attendance at a ceremony held on October 9, 2018 at the premises of RIT Kosovo. In attendance were representatives from the University of Pristina, RIT Kosovo, beneficiary institutions, USAID/Kosovo and REPOWER.

Following on the success of previous years, the internship program allowed for mutual benefit for both the students and industry professionals. Interns gained valuable hands-on experience, while companies were able to further fuel interest in the sector by engaging aspiring energy professionals. Representatives of the University of Pristina as well as RIT Kosovo have seen the positive impacts of the program, which have reaffirmed the University’s strong desire to continue their partnership with REPOWER.

USAID was encouraged to note that the internship consortium included more than 55% women participants. Our internship program seeks to encourage women in the Kosovo energy sector, one which is traditionally dominated by men, and demonstrates the gender-sensitive approach integrated into REPOWER’s programming and its commitment to raise the visibility of, and opportunities for, women in the energy sector.