Along a historically important railway line in Cumbria, UK, above the River Eden, a historical landslide from the time the line was constructed in the 1800’s was reactivated following intense rainfall of Storm Desmond that winter.

The relic landslip triggered significant movement of the southbound line. The scale of the movement resulted in closure of the line for some 14 months while AECOM undertook desk study, ground investigation and ground modelling, and explored and agreed options for a detailed design solution to reinstate the railway corridor to operations and stabilise the 500,000 tonnes of landslide mass.

Detailed design included the an in-corridor structural solution comprising the installation of an anchored contiguous bored pile retaining wall. Works started by excavating the top 4 m of embankment to create a safe working platform for installation of circa one hundred 20m deep steel cased, reinforced concrete, bored piles adjacent to the failing railway at the crest of the slope, and a corresponding set of 18m log anchor piles in stable rock on the far side of rail corridor. The two lines of piles were connected with a 1m thick reinforced concrete slab, with a 3 m high retaining wall to allow the track and drainage to be reinstated.

The in-corridor solution allowed the safe operation of trains in the event of continued landslide movement and the line was re-opened with the iconic Flying Scotsman returning to the line with a special excursion in March 2017.

Since construction the line has remained safe and open and the landslide movement has reduced to small values likely resulting from the mass settling down to a new equilibrium. Monitoring is ongoing and the project has been nominated for several awards. 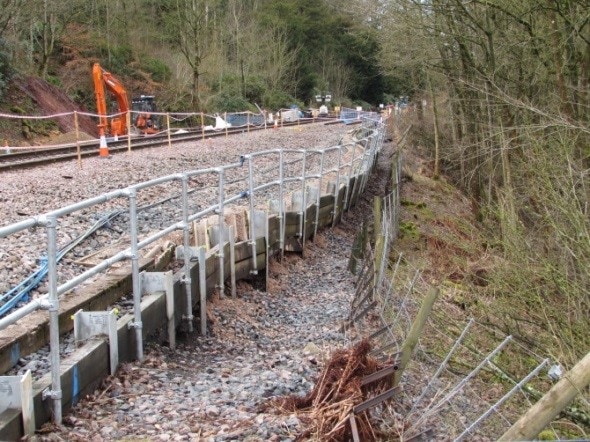