The Northern Hub rail programme includes the eradication of the Manchester bottleneck via the new Ordsall Chord rail link which for the first time connects all five of Manchester’s city centre railway stations reducing railway congestion and allowing new passenger services to run to create wide economic benefits across the north west of England.

The Ordsall Chord Viaduct is the iconic centrepiece at the heart of the Ordsall Chord, the United Kingdom’s first network arch rail bridge which sits next to major heritage structures, part of the historic 1830 Liverpool to Manchester Railway, the world’s first inter-city railway.

The project was delivered under a design-build alliance and AECOM provided design services within an AECOM Mott MacDonald Joint Venture. AECOM secured BS11000 Collaborative Business Relationships Standard accreditation for the Project, having established and developed joint working practices within the AECOM Mott MacDonald JV that enabled the two organizations to work truly collaboratively with each other and with the Alliance.

The Ordsall Chord involves extensive and varied structures, many of which are highly complex geometrically to satisfy architectural requirements. The design across all engineering disciplines was undertaken using extensive state-of-the-art Building Information Modelling (BIM). Early involvement of both the main contractor and steel fabricator has allowed conventional roles and processes to be challenged. Some of the steel fabricator’s staff were co-located within AECOM’s office allowing thus allowing the design model to feed directly into the steelwork fabrication model. For one structure, drawings were dispensed with entirely and this structure was built directly from the 3d model.

Adoption of these methodologies has supported successful delivery of structures with challenging geometric interfaces between steelwork, concrete, and existing brickwork arches. This has reduced programme and safety risks during fabrication and installation, improved efficiency and will provide a platform for enhanced management of the structural assets in the future.

‘The alliancing model was ideally suited to delivery of this complex project built within the constraints of a historic railway dating back to 1830. The collaborative ethos of the project was demonstrated in that Network Rail allowed the designers to self-certify and the close working relationship between the designer, main contractor and their suppliers allowed new ways of working.’ says John Longthorne, AECOM Major Project Director. 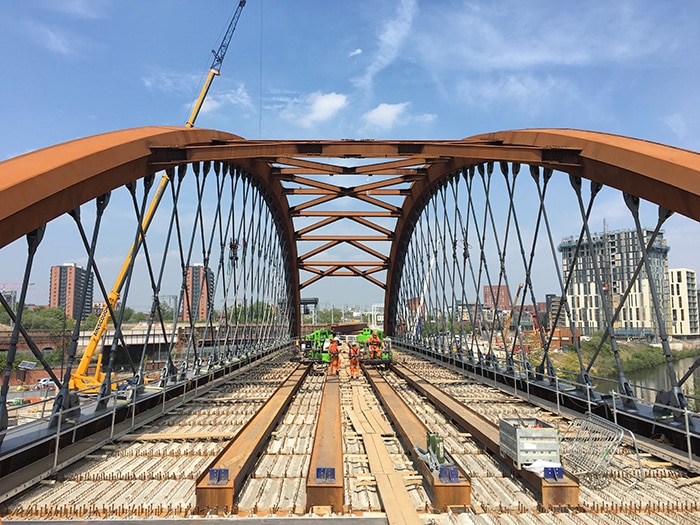