Early in the afternoon, our Land Rover bounced over the rocky roads of the village of Iltalal in Kenya.  As we caromed over the rutted tracks, the rattling and banging of the truck and our tools melded in harmony with the laughter of the roughly 10 people packed inside.  There was much cause for laughter and joy by that afternoon, despite the fact that, earlier in the day, we had struck out completely in our attempts to install small-diameter microwells using simple, hand-operated augers.

At location after location, we started drilling hopefully.  Inch by inch, we advanced the auger — one meter down, one and a half meters down, two meters down — only to have our efforts grind to a halt as we encountered layers of impenetrable volcanic rock.  As the faces of the non-locals in our group grew long with frustration, our Maasai hosts continued to laugh and sing as they strained to turn the augers into the stiff soil only to be rebuffed yet again.  What those of us — who had traveled thousands of miles to this water-strapped landscape in southern Kenya — saw as a series of failures that morning, our local friends saw for what it truly was: opportunity. 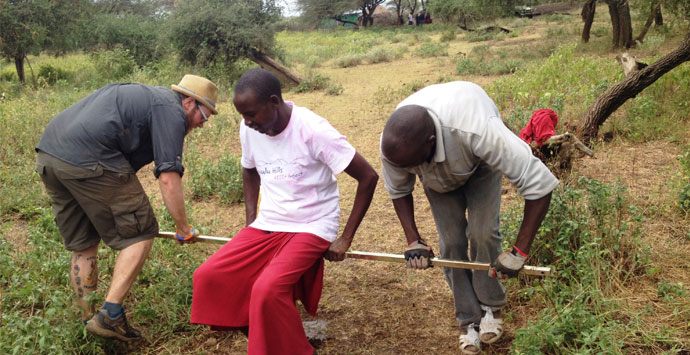 The 15,000 Maasai, who call the Kuku Group Ranch home, are facing a monumental water supply crisis.  The ranch is situated between the Kilimanjaro massif to the south in Tanzania and the southwestern slope of the Chyulu Hills, Hemingway’s “Green Hills of Africa,” to the north.  In the past, this landscape provided ample water for the Maasai population and its traditional pastoral lifestyle; however, rapid population growth in the local area and the urban centers of Nairobi and Mombasa, climate change, and the conversion of large areas of land from pastoral or undeveloped use to agriculture in recent years have led to a situation where the regional demand for water outstrips supply by nearly 25%.  This shortage has resulted in increased reliance on marginal sources and, consequently, increased rates of waterborne disease.  The Maasai Wilderness Conservation Trust (MWCT), which administers conservation areas throughout the ranch, reached out to AECOM for support following such an outbreak in 2012 that claimed the lives of multiple children.

A key finding of AECOM’s initial visit in 2012 was that potable water sources, which often times are nothing more than pits dug by hand until the water table is reached, needed to be isolated from livestock and wildlife.  Our trip, an early example of Engineers Without Borders (EWB) working with corporate partners, sought to act on this finding by installing small-diameter wells using hand-operated equipment and locally sourced materials.  AECOM provided drilling equipment, training and materials for two wells to a group of Maasai community members identified by the MWCT.  Our drill crew provided what would be the most important requirements for the success of our pilot project: motivation, innovation, and local knowledge. 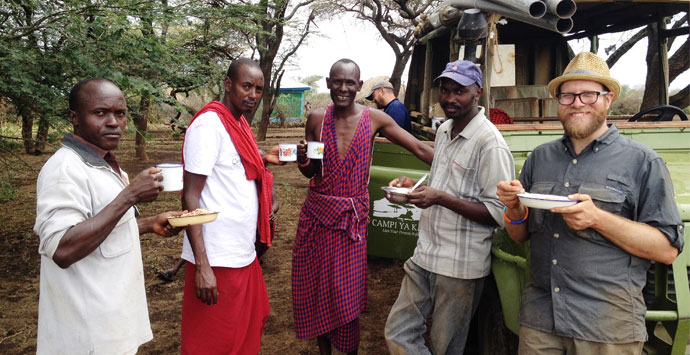 Our Maasai friends worked tirelessly and joyfully and were able to read the landscape for clues indicating a shallow water table such as the presence of water-loving Yellow Fever Acacia trees.  When our last section of well-casing snapped in half, and my colleagues and I scratched our heads as to how to repair it, the Maasai kindled a small fire and heated and perfectly flared a bell end in the pipe.  The Maasai community is no stranger to foreign aid.  The ranch is pocked with wells installed by non-governmental organizations that have gone dry or are constructed with pumps that are broken and cannot be repaired with local parts or require expensive diesel fuel to operate.  Where our project differed from many that came before was that we sought not to provide a finished product, but rather to provide equipment and the skills necessary to use it.  As our truck bounced north towards camp with the setting sun casting long shadows on the Chyulus on the evening of February 11, we grinned ear-to-ear having witnessed that afternoon the successful installation of the second microwell, but more importantly, a newly empowered community eager for the opportunity to face its challenges.

Matt Scharf, PE, is an environmental engineer who specializes in the assessment and remediation of contaminated soil and groundwater.  His other interests include water resources management, conservation, sustainable agriculture, backpacking and mountain biking.
LinkedIn: Matt Scharf

Making health and wellbeing wo... Discussing 'edible infrastruct...
Impact
Our experience during Nepal’s devastating, 7.8-magnitude earthquake
Impact
#CoolJobs: I get paid to climb trees and save bats
Impact
Endless impacts