AECOM Hunt served as construction manager – in a joint venture with Holder Construction, C.D. Moody Construction, and H.J. Russell & Company – for the state-of-the-art stadium, which is home of the National Football League’s Atlanta Falcons and Major League Soccer’s Atlanta United.

The stadium officially opened to fans on August 26, 2017 for an Atlanta Falcons versus Arizona Cardinals preseason exhibition game. As a multi-purpose venue, the stadium’s flexible design allows for up to 83,000 seats.

A standout feature of the stadium is a one-of-a-kind retractable roof composed of eight, 1,600-ton panels that each cantilever to resemble a camera shutter opening and closing. In addition, Mercedes-Benz Stadium houses a circular, 360-degree, “halo” video board that completely surrounds the top of the dome. The facility saves more than 40-percent in energy use compared to typical stadiums due to an extensive water capture and reuse system, over 4,000 solar photovoltaic panels, LED lighting, energy monitoring equipment, and energy-efficient glazing.

The stadium’s major architectural highlight is its one-of-a-kind retractable roof — composed of eight, 1,600-ton panels that each cantilever 200 feet — that looks similar to a camera shutter opening and closing. It takes less than 8 minutes to open the roof.

A new 360-degree HD “halo” video board is the largest in the world at 58 feet tall and 1,000 feet in circumference. It features 64,000 square feet of LED, giving every fan excellent sightlines no matter where they sit.

Water conservation and management was a core focus of the stadium’s design. The facility captures rainwater for reuse in a cooling tower and in irrigation of the landscape and trees. It is 42 percent more water efficient than the Georgia Dome.

Solar panels, LED lighting, energy monitoring equipment and energy-efficient glazing will save more than 40 percent in energy use compared to typical stadiums. 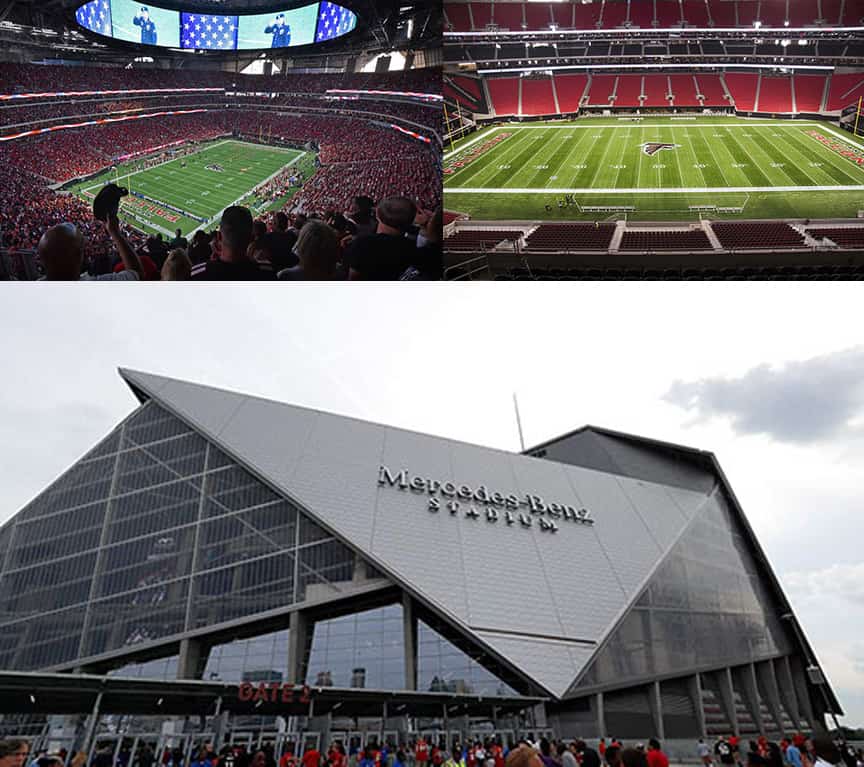