From May 30 to June 1, Solomon Islands’ Cocoa Industry Working Group held the country’s first Cocoa Festival in Honiara. The Working Group was established through assistance from the Pacific Horticultural and Agricultural Market Access (PHAMA[1]) Program, an Australian Government initiative co-funded by the New Zealand Government. The Working Group hosted over 100 attendees at the event including cocoa producers, buyers, exporters, local businesses and government representatives.

As part of the week-long festival, a Cocoa Competition was held to judge the highest-quality produce. Cocoa producer Elsie Sedo from Guadalcanal Province won the competition, stirring a great amount of interest from international chocolate producers.

Elsie’s win highlighted women’s contributions and roles in Solomon Islands’ Cocoa industry. More than 50 percent of producers and processors of cocoa in Solomon Islands are women. In addition to being producers and processors, women are typically quite heavily involved in the growing and harvesting stages, in addition to fermenting and drying of cocoa beans.

Above photo: Elsie Sedo standing in front of her farm’s solar drier supplied by the PHAMA program and Solomon Islands Rural Development Project. 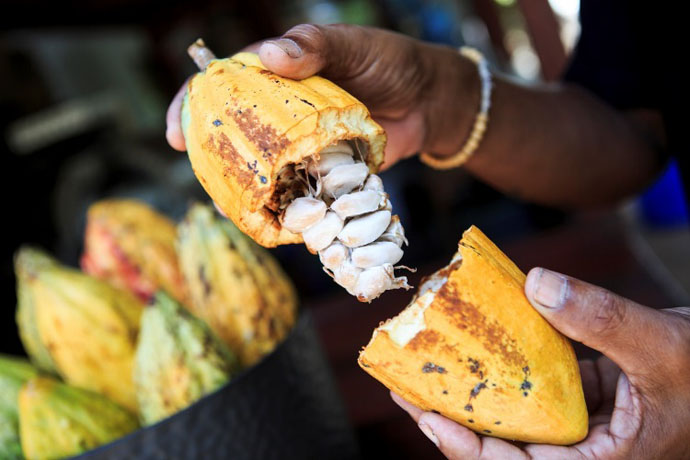 In the festival’s Cocoa Competition, 14 percent of samples came from farms operated and managed wholly by women. Cocoa is an important export earner and source of rural livelihoods in Solomon Islands, with 75 percent of export returns retained by producers. Some 20-25,000 smallholder farmers and their households are involved in production. Some 4,000-5,000 tons of cocoa beans are produced annually, mainly by smallholders. Cocoa is one of Solomon Islands’ biggest agricultural export earners, generating around USD15 million in exports per year.

Judging of the cocoa was facilitated by international chocolate producers from the United States and New Zealand who blindly taste-tested chocolate samples produced from cocoa beans from the competition’s 10 finalists. These samples were selected prior to the event from 80 samples of beans entered into the competition from across six provinces. First and second place were both won by women. 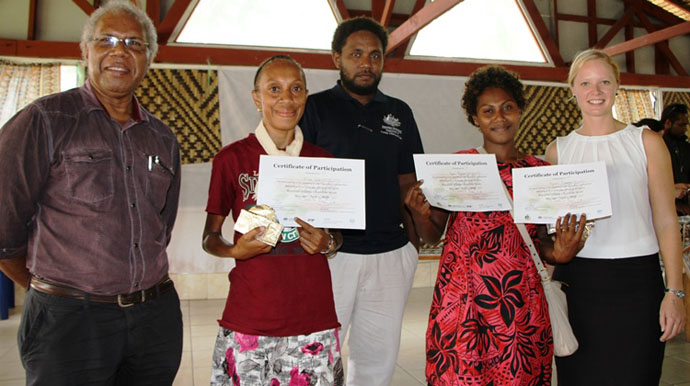 Jimmy Saelea, permanent secretary for the Solomon Islands Ministry of Agriculture and Livestock (MAL) with Cocoa competition finalists and representatives from the Australian High Commission in Honiara.

The Australian and New Zealand Government PHAMA program was one of the event’s sponsors in addition to ADRA (Adventist Development and Relief Agency), RDP (Rural Development Project), and MAL.

PHAMA works with the cocoa industry in the Solomon Islands to address quality issues, increase access to market information, and secure niche markets for quality cocoa beans. Cocoa quality improvement is a key focus for the program with a view to accessing price premiums from high-end buyers and assisting Pacific farmers and exporters to link with those buyers. 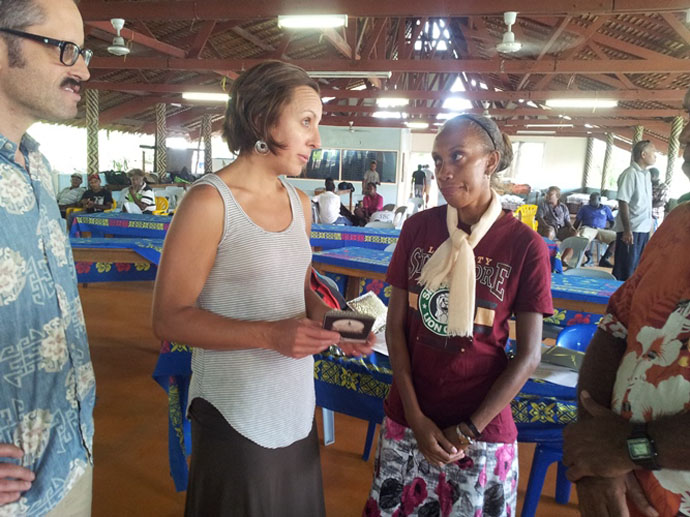 PHAMA is working with cocoa growers and exporters to better understand market opportunities around quality and potential modalities for trade finance, which is expected to lead to improved export pricing and increased incomes.

The program commissioned a gender analysis of the cocoa value chain in Solomon Islands, which has provided recommendations on how programs like PHAMA can help empower women involved in the cocoa value chain. An immediate entry point for the program is the involvement of women in solar drier trials for cocoa. Other recommendations for PHAMA and similar programs include increased access to training, finance, education and awareness, public-private partnerships, and specific business ideas. Event sponsors are looking at making Solomon Islands’ Cocoa Festival an annual event to support further growth in the nation’s cocoa industry.

[1] PHAMA is designed to help Pacific island countries better manage and utilize opportunities to export primary products including fish and forestry products. Australia and New Zealand are markets of major importance, along with export markets beyond the Pacific. The core countries assisted through PHAMA are Fiji, Tonga, Samoa, Vanuatu, Solomon Islands and Papua New Guinea. PHAMA also provides assistance to other Pacific island countries through the Secretariat of the Pacific Community’s Land Resources Division. PHAMA is implemented on behalf of the Australian Government by AECOM.