Credit: Victor Zastolskiy/Shutterstock. We are living in a period where a “new normal” is being created in climate. In 1980, overall capital losses from natural disasters were approximately $60 billion; by 2010, the capital losses have trended to over $200 billion per year. Said another way, the losses from disasters have exceeded $2.5 trillion since January 1, 2000 — a staggering $16.2 million per hour!  To make a bad situation even worse, over 75% of these losses were uninsured.

Another measure is loss events.  In 1980, there were approximately 350 disaster events.  By 2013, the total number of events increased to nearly 900 per year! The increase occurred from meteorological or hydrologic events. Progress has been made in reducing fatalities from disasters; however, the impact of these capital losses is of great concern.

There is a saying that “a wise person learns from the mistakes of others, while a fool learns from their own mistakes.” The frequency and intensity of natural disasters is increasing, and we may not necessarily agree as to why. Coupled with this increase in events is the migration of people to urban areas; in 1913, only 10% of the world’s population lived in cities.  Today, over 50% of the world’s populations reside in urban areas, and this percentage is projected to increase to 70% by 2050. Cities are the “heart beat” of modern society. Consequently, it is paramount that we improve resiliency in our cities. 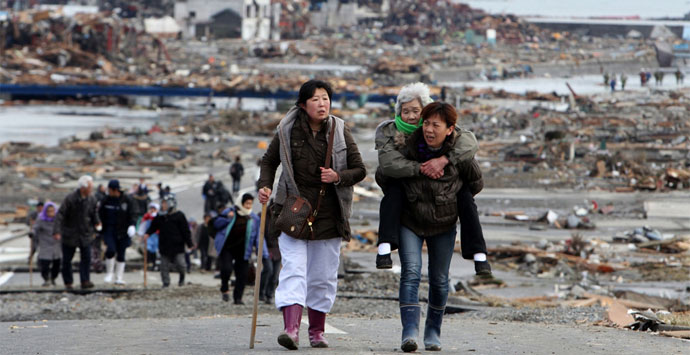 A woman carries an elderly woman on her back after the 2011 tsunami in Japan. Minami-Sanriku-cho, a town located in Miyagi Prefecture, is unrecognizable. Credit: The Kahoku Shimpo.

AECOM has been active in the United Nations International Strategy for Disaster Risk Reduction (UNISDR) since 2011 with a focus on building the business case for private-sector engagement in building infrastructure resilience.  The UNISDR seeks to increase awareness of the increasing trend in natural disasters to improve planning for these events, achieve more effective response actions, and accelerate community recovery after these events.

It has been reported that $1 in planning can save $7 to $10 in response cost.  As vice chair of the U.N. Private Sector Advisory Group, I have worked to build more public/private sector engagement in disaster risk reduction. With IBM, AECOM created a Disaster Resilience Scorecard (DRS) that is used by cities to establish a benchmark of preparedness, which then can be used to develop a multi-year resiliency improvement plan.  The DRS is an algorithm of 81 questions built around the “Ten Essentials” in the U.N.  “Making Cities Resilient” campaign. AECOM has participated in public/private sector workshops in Africa, Asia, Australia, Europe and in North America.

As I write this blog, I am at a public/private sector meeting hosted by the Wal-Mart Foundation discussing disaster risk sensitive investments with over 50 senior officials. Yes, there is much to do to build resilience in our communities but all great journeys begin with a single step.

I close this blog with a notable quote attributed to our Gary Lawrence, AECOM chief sustainability officer, at the U.N. New York meetings last week: “Our company will never be the dark specter feeding on the misery of people in the aftermath of disasters. We’re about improving human lives.”

Designing for Disaster How can cities increase seismi...
Impact
A few walls of fresh paint — and countless memories
Impact
Excellence Awards: River of Life project brings together a diverse team
Cities
Working in the Digital City