Claire Bonham-Carter is vice president of sustainability and resilience in AECOM's Buildings + Places business line in the U.S. West region.

The side event program at COP 21 is full of speakers representing cities, whether in the Blue Zone (negotiations, special pass only), Green Zone (climate generation area, open to the public) or in the other events happening all over Paris. It is abundantly clear how important cities are to helping countries make significant progress towards their carbon reduction plans or INDCs (‘intended nationally determined contributions’).  The energy and excitement around this is palpable – and unprecedented.

In my last post on Friday about Climate-KIC, I mentioned the importance of entrepreneurs and technology in achieving those goals. But while technology is part of the solution, it is not the only one.  Mayors from around the world are continuing to step up to be the greenest in their region, or state, or country, and this requires them to put in place significant policies and programs to change the way their city works. From building energy benchmarking ordinances, to bike and electric car share schemes, to energy conservation incentive programs, cities can play a powerful role in changing the behavior of their residents and businesses.

As of Saturday this week, around 400 mayors had confirmed their commitment to carbon reduction by signing on to the Compact of Mayors, which commits them to developing a greenhouse gas inventory (also known as a carbon footprint) and to setting a carbon reduction target. It is not just the big, well-known cities with the far reaching targets; an event at the ICLEI cities pavilion in the Green Zone included the Mayor from Sonderberg, a small city in Denmark of 75,000 people that has a set a goal of being carbon neutral by 2025. There are many more small cities in the world than large, and having leadership at this level is incredibly powerful.

What is needed to help cities make progress towards these targets in what will be a very critical next five years (as 2020 is a horizon year for many cities)? This is also one of the points being debated this week during the final negotiations – whether INDCs should be revisited before 2030 – as the current suite of INDCs will only keep the global GHG emission trajectory to 2.7-5.0 °Celsius by the end of this century, and not below 2°C, as requested by the IPCC to ensure a climate-safe future for all people.

AECOM co-hosted a convening with the Natural Resource Defense Council (NRDC) on Sunday to discuss this very question. The meeting was attended by large philanthropic organizations such as CIFF, the Oak Foundation, the Surdna Foundation, the Ford Foundation, ClimateWorks, the Kresge Foundation, and Bloomberg Philanthropies, who have all recognized the importance of cities in fighting global climate change, and given their limited resources (compared to government budgets or the private sector), want to understand with as much precision as possible what they should be funding. Many of them are already funding climate action. Organizations that are representing important networks of cities were in the room – the C40, CDP, the Urban Sustainability Directors Network, and ICLEI, as well as NGO’s like ITDP, Transit Centre, and Institute for Sustainable Communities. 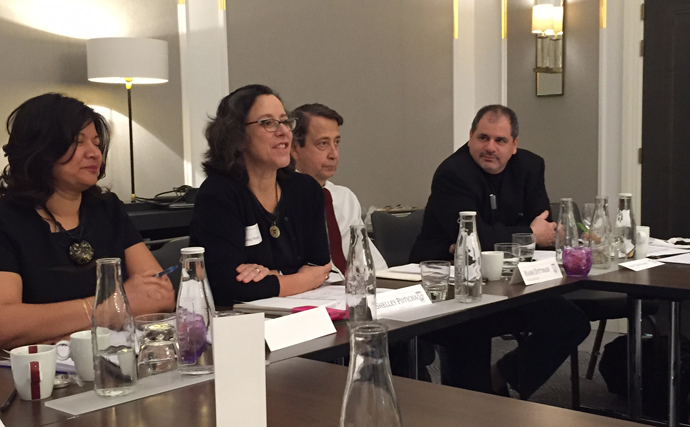 Many mentioned the power of convening city representatives for best practice sharing and problem solving (and good healthy competition), both at a mayoral level (such as C40) and a staff level (USDN and 100 Resilient Cities). C40 referenced recent research that indicated that 30% of the climate action carried out by their cities was the direct result of collaboration. All recognized the need to be focused on the human aspect of climate change and prioritize climate actions that benefit people and advance social equity.

The Stockholm Environment Institute has recently released research funded by Bloomberg Philanthropies identifying the mitigation measures by region that have the most potential for carbon reduction.

The funders also commented on the need for NGOs to collaborate on strategy and activities and bring a unified set of recommendations to philanthropy with a very specific request for the top three priority actions for the next five years to really move the needle. The next five years is critical, whatever happens this week in the negotiating room.

Claire Bonham-Carter is a director of sustainable development for AECOM.

Notes from COP 21: urban chall... Air Force Academy cadets get m...
Climate Change
Meeting the urban challenge
Cities
Resilient Oakland: It Takes a Town to Thrive
Cities
What can the ‘smart city’ gain, and what might it lose?