The point of a pilot

Taking risks and testing performance – that’s the point of a pilot. These two key themes emerged in a recent AECOM conference presentation in Sydney.

The conference explored Next Generation Activity Based Workplaces (ABW). I shared an extended case study of SBS’ Agile pilot space in its Artarmon headquarters.

With a background as Australia’s multicultural broadcaster, SBS has a special charter to provide multilingual, multicultural and Indigenous radio, television and digital media services that inform, educate and entertain all Australians, reflecting Australia’s diverse society.

AECOM has been helping SBS to rethink its workspace to seize the opportunities of media convergence – staff need to be able to work flexibly across content areas and drive multiple platform delivery.

Our SBS client, Manager of Corporate Services Martin Wright, has been leading SBS’ vision of a more innovative and efficient working environment through a period of high-profile budget scrutiny from the Federal Government.

In November, an Australian Federal Government report on possible expenditure cuts at Australia’s two public broadcasters flagged the concept of “variabilising” fixed property costs, suggesting moves by employers to more flexible work practices – and a portfolio of space options that encourage more collaborative consumption of space – might become even more of a priority.

Flexible work practices should be taken up more broadly in the public sector in Australia, where we lag well behind the UK civil service and the US General Services Administration. It was good to see representatives from the Department of Finance and the Department of Prime Minister and Cabinet paying close attention at the ABW Conference.

SBS’ Agile pilot is an island of raw, experimental energy in its Artarmon building. It looks, feels and sounds like a creative community. All work points are shared, and a wide range of options beyond the desk give staff plenty of choice of where to focus or collaborate.

New laptops, headsets and the wireless presentation screens were all part of the IT upgrade to enable mobility. It’s just celebrated its first year in action, and AECOM’s Strategy Plus team has completed a post occupancy review of the pilot to understand how it is performing and to build an evidence base that shapes how its workspace develops from here.

The review process included interviews, workshops and onsite observations. It also revisited the previously completed online survey and space utilisation study. The review calibrated the performance of different work settings; while the establishment of sit-stand desks was popular, the ‘grassy knoll’, in contrast, was seen as a design folly that failed to meet comfort basics for viewing content over extended periods. The feedback was clear on what worked, and the evidence we gathered on the ‘workarounds’ confirmed where the change process required more attention. 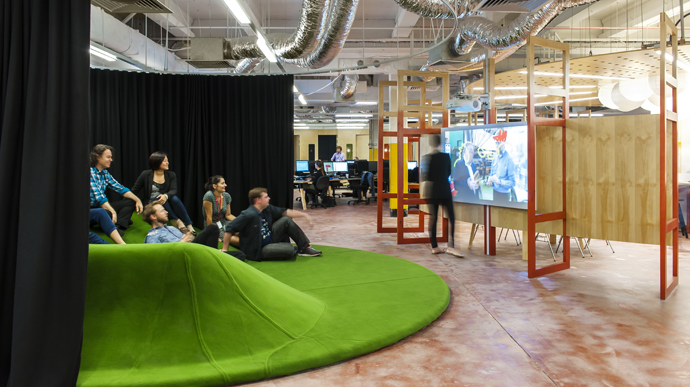 As we were putting the presentation together, Martin commented that the pilot review process has given him a solid foundation for future development. In much the same way the initial strategic brief for the space framed the design and implementation process, the pilot findings are now setting up the next evolution of the Agile program.

One key change is the need to give work groups the security of a location, but not the ownership of a desk.

SBS wanted to promote collaboration and crosspollination between different work groups in the pilot, so no team neighbourhoods or home zones were put into place throughout it. However, the feedback from participants was that it was more important to be within ear-shot of your primary colleagues than to work alongside people in other teams.

For SBS, the point of the pilot was to take some risks. It needed to trial new settings and new behaviours and, most importantly, set up a feedback and learning loop for the next stage of the public broadcaster’s accommodation story. If you’re not scoring an epic fail in some part of the space or the process, then you’re probably not pushing hard enough beyond the frontier of the organisation’s comfort zone. Pilots let you test these risks before the size of the capex starts to rule them out. And the nature of a building project – long lead times and extended delivery – means that any major new accommodation project needs to position the organisation for where it needs to be, not where it is now.

Sue Wittenoom (sue.wittenoom@aecom.com) is a director of AECOM’s Strategy Plus practice in Australia. Follow her on twitter @swittenoom