What recent protests in Brazil mean for cities and planning

In an op-ed in the New York Times last month (“Let them eat soccer”, June 25), the Brazilian writer Elio Gaspari captured the corrosive effects governmental corruption and class divergence have had in Brazil. But the echoes of recent protests may carry a more specific lesson for planners and leaders, not just in Brazil but around the world.

Triggered by bus fare hikes, then ballooning around a range of causes—including corruption, substandard healthcare, inadequate schools, and World Cup stadium expenditures—an underlying theme resonated around the disconnect between the needs of everyday citizens and the perceived interests of leaders and the state. The disconnect became a galvanizing force between classes in a country famous for social strata.

There are scores of different issues here, and no easy solutions, but at the core a reminder for leaders and planners of the democratic principle of transparency in building infrastructure for the common good. When it comes to large-scale efforts for transitory events, major investment must be guided by long-term interests.

If there isn’t a local tradition of governmental openness and public participation—and an expectation that the planning holds a primary vision toward the public interest beyond the game—then people have a right to ask questions. And if they aren’t hearing plausible answers and seeing progress, “Vem pra rua”— come to the street, as they chant.

A major target of the protests became the investments being made in the World Cup 2014 and Rio 2016 Olympics. Why a government struggling to provide basic infrastructure and proper schooling and should be investing in global events quickly became the headline story. Yet delivering a positive social and physical infrastructure legacy for local communities ought to underpin the planning of these types of events.

In two Brazilian cities, AECOM is advising on projects that in fact demonstrate a concerted legacy focus. In Recife, the World Cup Stadium is the anchor for an new city quadrant, Cicade da Copa, that introduces transportation infrastructure to a previously disconnected zone and restores ecological functions to a site previously disrupted by a long history of agriculture. In Rio De Janeiro, the Olympic Park in Barra da Tijuca will provide the celebration grounds for the biggest cluster of Olympic venues during the Games, and in the long-term transform an underutilized waterfront district in the heart of Barra (a zone of Rio planned in the 1960’s when monumental land use planning was in vogue). The intention with both of these projects is to usher in accessible neighborhood development and encourage public-private partnership to meet Brazil’s growing urban needs. 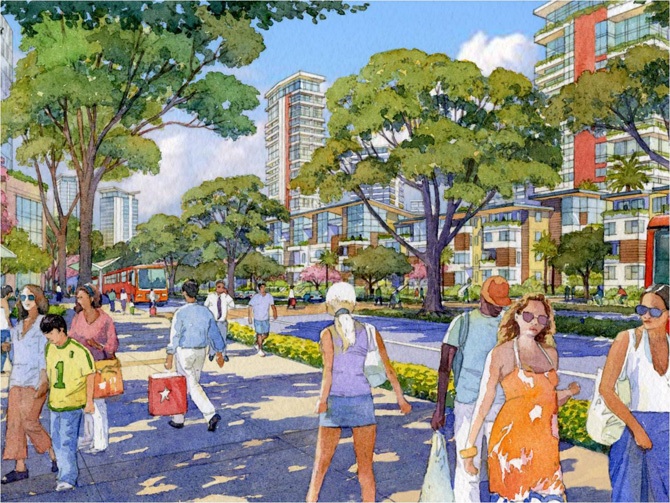 In these cases, local and international planners are analyzing lessons from around the world and responding to unique Brazilian conditions. In particular, lessons from  London’s  2012 Leah River Valley transformation (where a comprehensive environmental clean-up and infrastructure investment prior to the games focused on invigorating a once-derelict section of the city for its community) informed the approach to both of these projects.

The recent protests in Brazil underscore the importance of ensuring that major events are planned with a focus on the future—and fully communicating the specific value of those efforts to the public.

The protests can be a reminder that an important validation of mega-events should be in how they spur investment in local schools, hospitals, parks, water, energy and transportation infrastructure. Managed with this criteria in mind, these events can deliver real value for the public and are a metric for the maturity of a well-functioning governance structure and private sector. The World Cup and the Olympics should be opportunities for people to come to the streets, not in frustration, but in celebration—in sharing their city and culture with the world, reveling in excitement of competition, and knowing that in the long run, the community can be the real winner. They should be the source of long term value, allowing people to live, work and play in healthy neighborhoods where abundant mobility and a thriving ecology are the new norm.

Adam Williams (adam.williams@aecom.com) is an urban planner with AECOM in Rio and Melbourne.

Muaricio Duarte (mauricio.duartepereira@aecom.com) is an urban designer with AECOM in Recife.