A greener city is a healthier city

The reports are in: Urban greenery has a measurably positive effect on physical and mental wellbeing. Greenery from tree-lined streets to trails and verdant parks and plazas abet physical exercise, a key factor in the fight against obesity and heart disease. Greenery also helps prevent heat strokes by affording cooling shade and improved ventilation, and reduce the incidence of asthma by absorbing airborne particulates.

But perhaps more important, greenery helps relieve anxiety disorders (stress) and depression, common afflictions associated with our harried urban lives. As one study puts it, “Support for this possibility comes from epidemiological studies which find that individuals living in the greenest urban areas tend to have better mental health than those in the least green areas.”1

The social cost of anxiety and depression is significant. One report states that “Workplace stress costs U.S. employers an estimated $200 billion per year in absenteeism, lower productivity, staff turnover, workers’ compensation, medical insurance and other stress-related expenses”.2 And a study by the American Psychological Association indicates that ¾ of the nation’s medical bill is associated with chronic illnesses, a malady that is driven by stress.3

From the perspective of pubic health there is every reason to invest in a greener urban landscape—especially when such greenery can also perform vital infrastructural functions related to, say, stormwater management and energy conservation.

But there is more to the health benefits of greenery than the relief of anxiety and depression. Little discussed in academia or professional associations, and hardly ever proposed in practice, is the spiritual dimension of the landscape. And yet access to natural areas is proven to elicit transcendent reactions that can postively affect our well-being. It has been well documented, for example, that hospital patients who can see greenery from their windows recover more quickly than those who don’t.4  There is latent healing potential in the design of any landscape, a matter that is confirmed by the biophylic effects of healing gardens. 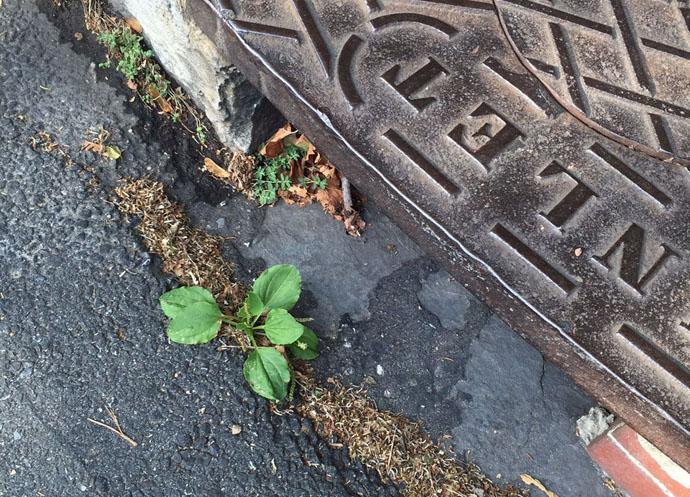 As suggested by a weed growing out of a sewer inlet (above), nature’s quest for life and regeneration is as opportunistic as it is boundless. Nature is simply life-affirming—relentlessly so. How can the human spirit not be lifted by such power when our health is on the line? But why wait until a health crisis arises? The places in which we live and work should constitute fitness-inducing, stress-mitigating and life-affirming environments to start with. Like a green view from a nation-sized window, our collective wellbeing depends on it.

Cities, like pristine natural areas, are structured entities. At the scale of the region there are networks of open space that satisfy large-scale needs, such as flood protection, transportation and resource-based recreation. At the community scale there are streets, plazas and parks that provide for active mobility, organized play and social exchange. And at the dwelling scale, such as Friedensrech Hundertwasser’s apartment house in Viena (top), there are dense developments that, like a garden, afford personal and intimate access to foliage, flowers and birdsong (that it is also art will be the subject of a different blog!).

Within such a tiered schema urban greenery must be integrated systematically, not as afterthought but as forethought toward the creation of a healthy environment. To this pursuit the role of Landscape Architecture is not peripheral but central: It is the agency by which cities can become health havens—for the body, for the mind and for the spirit, from the scale of the region to that of discrete buildings and places. Why not regard cities as landscape, communities as park, and buildings as garden? 5