From left: Arsine and Meline as children by the Caspian Sea in Iran.

We were born to an Armenian family and raised in Tehran, Iran. As teenagers, we immigrated to the United States with our parents in 2004. We clearly recall our first day of school in California, carrying a dictionary to our math class. We remember completing all of the problems at the end of the chapters since, oddly enough, we did not understand the meaning of “odd numbers only.” We received praise for going above and beyond the required assignment, yet, little did anyone know that we struggled to comprehend simple directions given in English.

As teenagers, we thought learning English was the most difficult thing in the world, until we attended college and took thermodynamics. As first-generation college students, this was the beginning of our journey into the mysterious world of mechanical engineering. For quite a while, the word “diversity” was ambiguous to both of us until we joined the Society of Women Engineers (SWE). Upon serving as officers of SWE, we became involved in the community and helped inspire younger female students to truly enjoy their physics and math classes.

Before graduating from college, I (Meline) completed an internship at a waste-to-energy power plant while pursuing my master’s degree specializing in thermo-fluids. Simultaneously, I (Arsine) had the opportunity to move to the state of Washington for the summer and join the team working on the Hanford Nuclear Waste Treatment and Immobilization Plant. 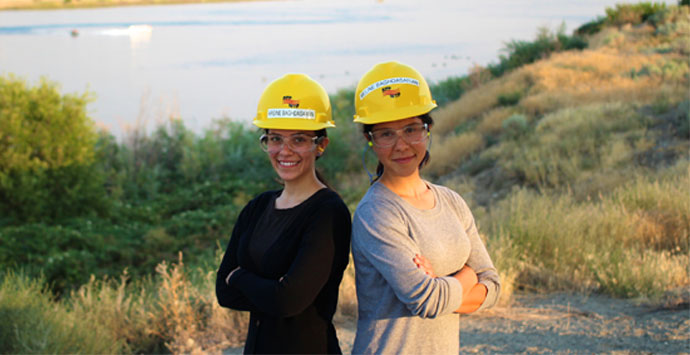 From left: Arsine and Meline Baghdasarian by the Columbia River in Richland, Washington. Protecting the river and the surrounding community is one of the goals of their current project with AECOM at the Hanford Site.

After receiving our degrees from California State University, Los Angeles, we both relocated to Richland, Washington, as cognizant system engineers at AECOM to work on the construction of the world’s largest nuclear waste treatment plant. This was the turning point in our professional careers.

A total of 56 million gallons of nuclear waste is stored underground at the Hanford Site — the remains of the plutonium production from World War II and the Cold War era. Many of these tanks have leaked, threatening the Columbia River and the surrounding community. The project’s ongoing efforts are to stabilize the waste by building and commissioning a nuclear waste immobilization facility.

We started our careers with the Plant Engineering department, working on mechanical handing systems to justify that high radiation and contamination areas can be maintained remotely in the future. Being part of AECOM has given us the opportunity to collaborate with a talented team to solve one of the most critical environmental efforts of all time. Upon graduating from college, we were both determined to pursue a career with a valuable purpose, work with a wonderful team, and learn how to cook while living on our own! AECOM has granted us the opportunity to achieve all three of these goals. 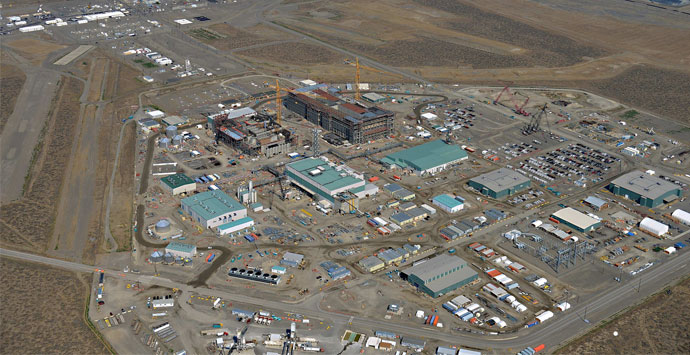 An image of the Hanford Nuclear Waste Treatment and Immobilization Plant with the tank farms shown at top left. (Photo courtesy of Vit Plant)

We have now realized that challenges are opportunities not to be avoided but to be embraced. Embracing these challenges leads to discovery — discovery of new people, discovery of information, and discovery of ourselves. Through all these years, we’ve written valuable chapters in our lives, and this is just the beginning of a new one.

Meline Baghdasarian is a cognizant system engineer at the Hanford Nuclear Waste Treatment and Immobilization Plant in Washington, United States. She also has a journal publication in Physics of Fluids on numerical modeling of thermally stratified spin up flows and is a member of Tau Beta Pi and Pi Tau Sigma engineering honor societies. One of Meline’s greatest enjoyments is exploring the tri-cities through her 30-mile bike-rides near the Columbia River.
LinkedIn: Meline Baghdasarian

Arsine Baghdasarian is a cognizant system engineer at the Hanford Nuclear Waste Treatment and Immobilization Plant and is the lead author of an American Society of Mechanical Engineers conference paper on experimental research of energy efficiency in buildings. Arsine is a lifetime member of Tau Beta Pi and Pi Tau Sigma engineering honor societies. Aside from her role as an engineer, she enjoys painting, swimming, and hiking the Badger Mountain.
LinkedIn: Arsine Baghdasarian

A greener city is a healthier ... A few walls of fresh paint —...
Impact
Inspiring civil engineers to design a better future
Impact
Nine things a director of sustainable development vows to change
Impact
Driving my passion for transportation engineering and safety