I recently visited Auckland, Melbourne, Adelaide, and Sydney recently, speaking in various venues about globalization, emerging technology, and their impacts on cities, including a presentation at the Adelaide ‘Open State’ festival.

From traditional North American/European perspectives, both Australia and New Zealand are the ‘end of the line’. Auckland is 12 hours ahead of London – literally on the other side of the planet.  But in the past decade, ANZ’s most globally active cities have been going from strength to strength. Sydney, Melbourne, and Auckland in particular are booming. Of course their baseline trade and exchange is the foundation for this. But these cities are also becoming globally relevant destinations of choice for the next generation of wealth creators. And people attract people: new generations go because other young people are already there.

In the background of all this are the explosive urbanization rates in Asia. One million people move to cities every week, ignited primarily by China and India. This rate of urbanization is set to continue for the next 15 years, and some of this urbanization ‘leaks’ into ANZ. The continuing mixing of cultures and innovation concentrates talent and investment, creating new opportunities. But there are also new challenges related to congestion and economic inequality. Some of the cities that are consistently voted most ‘liveable’ and ‘most affordable’ are also experiencing related disadvantages – their affordability is a proxy for their aging populations and their increasing struggle to attract and retain younger generations.

There is a lot of energy in AECOM’s Australia and New Zealand studios, where the Brilliant Cities team has undertaken many new initiatives, including the launch of a new report titled Transport on Demand: Accelerating Australian Cities, which features primary research produced by AECOM in cooperation with GoGet, Australia’s biggest car share network. Follow the discussion on twitter using #brillcities and #urbanmobility. 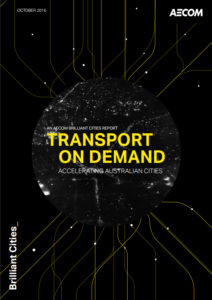