Rosanna, Belinda and I have been immersed in the Indian city of Bangalore for over a week now, as we help not-for-profit Pollinate Energy deliver clean energy solutions to India’s poor as part of its Young Professionals Program. Bangalore is a fascinating, rapidly-changing city, and today I want to share a little bit about it.

Recorded history at the site of modern Bangalore goes back some 1,000 years. One anecdote tells of an 11th century King who got lost on a hunting trip in the area, and was saved from starvation by an old woman who served him boiled beans. He named the site ‘benda-kaal-uru,’ which literally translates to ‘town of boiled beans,’ and from which Bangaluru (the Indian name for Bangalore) is derived.

It’s immediately obvious upon arrival in Bangalore that the city is undergoing rampant growth. Highways are being built, and high-rises are sprouting from the ground. Everything, as we’ve quickly learned, is done with an India flavour; the image below shows the contrast of old India against modern infrastructure. 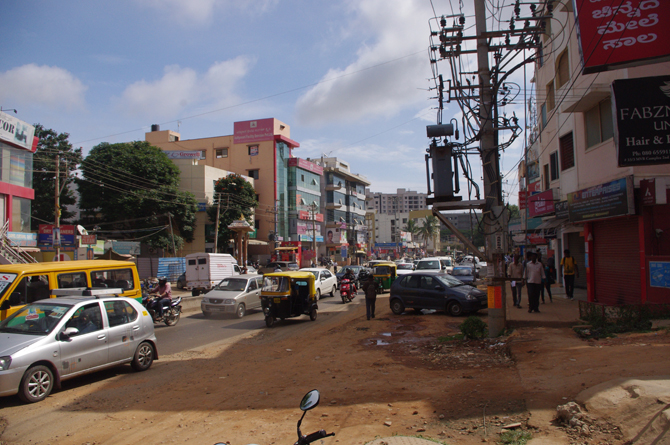 When looking a bit closer at the demographics of Bangalore, statistics support what is very obvious in the streets.  The population of the city has grown by almost 50 percent in the past decade, standing at almost 10 million. With such rapid growth and little urban planning, the outcome is pretty chaotic, but amid this chaos lies the charm of Bangalore, and the influence of traditional India is still strong.

The lure of jobs and opportunities in Bangalore is as strong for India’s rural poor as it is for professionals. Many of the people living in the poor communities we are working with have come to Bangalore for a job, typically in the construction (labourers) and service sectors (cleaners, cooks, etc). The tent cities found on vacant land across Bangalore (like the one below), when juxtaposed against the sky-scrapers that the slum dwellers are building, make for quite a sight! 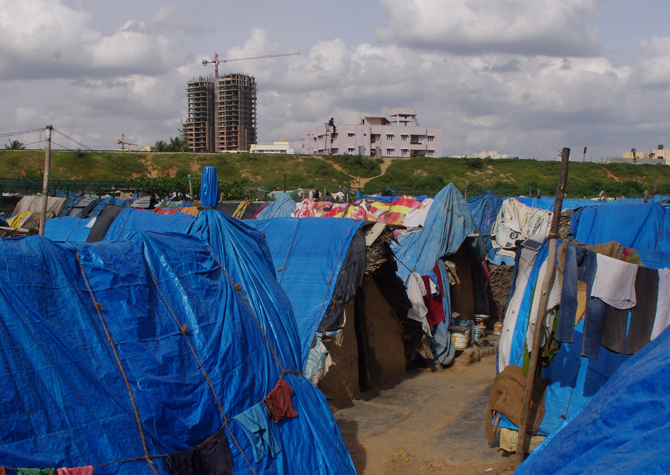 The number of people living in the slum communities varies. Many residents live something of a transient existence, and many are also ‘illegal.’ I’ve read that anywhere from 10 percent to 35 percent of the city’s population live in more than 500 slums.

Because Bangalore exists in such a state of flux, it has been an amazing city to spend time in. The work we’re doing with Pollinate Energy is making a real difference to local communities, and we’re really valuing the opportunity to see many sides of the city, meet its people, and gain an insight into the way of life here. There’s plenty more to come; until next time!