Companies are the X factor

Two years ago, after returning from the very successful COP 21 in Paris, I remember a conversation about corporate engagement with former U.S. Special Envoy for Climate Change Todd Stern. Noting a sea change in private sector support for an aggressive plan to address climate change, Stern said that at COP 15 in Copenhagen (2009), companies had actively fought against the efforts of the negotiators to craft a new climate agreement, but that in Paris, the companies were pulling the negotiators forward. What I noticed in Paris was that many large, well-known companies were holding events, meeting with officials, and even making public statements of support—but corporations were still ancillary players. This was not surprising as the COP is, at its core, a meeting of negotiators from the 198 nations that have adopted the UN Framework Compact on Climate Change.

This year, the COP felt different. Under a concept called one conference, two zones, there was still an official segregation of the negotiations in the Bula Zone and all of the other activities in the Bonn Zone. Thanks to my good friends at Georgetown University, I was privileged to be credentialed as an observer in the Bula Zone; therefore, I had access to the entire conference. But I spent most of my time in the Bonn Zone because it wasn’t just companies and NGOs making their pitches to whomever wandered by. It was a true partnership between governments, NGOs and companies having substantive discussions and announcing new initiatives.

In addition to the World Wildlife Fund PandaHub event I described in my last post, I participated in or attended events at the national pavilions of the EU, Fiji, France, China, Turkey, Indonesia, Germany and the UK. One UK event on city sustainability in Scotland was followed by a sampling of that great Scottish export, single malt whisky. There was no U.S. national pavilion this year, but in a series of igloo-shaped tents just outside the Bula Zone, the U.S. Climate Alliance (#wearestillin) hosted a series of meetings, presentations and panel discussions with American governors, mayors, NGOs, companies and members of Congress. All discussed the importance to the U.S. economy of investments in both climate change mitigation and adaptation. 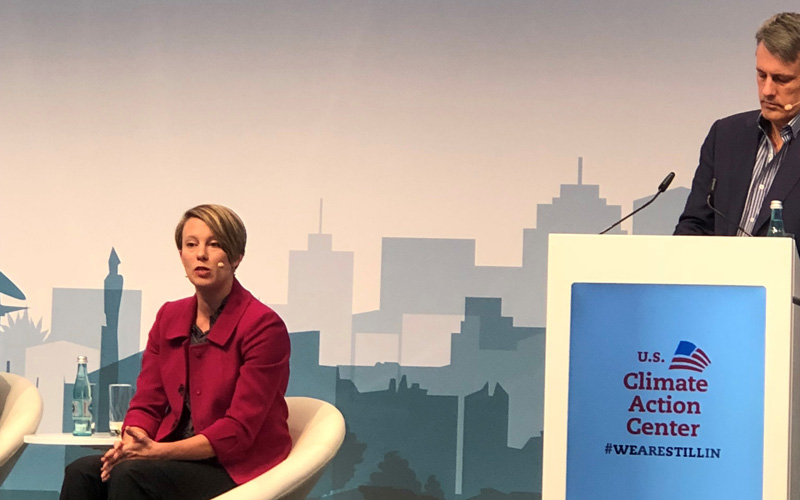 My final speaking event at the COP was in the U.S. Climate Action Center. Along with representatives from PG&E, Ingersoll Rand, Johnson Controls, and Jupiter Oxygen, I spoke on a panel of U.S. firms engaged in the clean energy and technology market. On another panel, Bank of America, S&P Global and JP Morgan Chase discussed the very good performance profile of sustainable companies. Other companies such as Microsoft, Walmart, Coca-Cola, and Mars (the M&Ms people) talked about their sustainability commitments and initiatives. Mars involvement led to one session moderator, Tim Juliani of Edison Energy, raising a specter that should lead to broader concern for the risks of climate change—the possibility of a world without chocolate.

As I head home from Bonn and compare my experience with previous COPs, I am struck that the private sector is now acting as an equal partner to the government and NGO players in the fight to address global climate change. Governments and NGOs clearly understand that without corporate engagement and action, the plans and goals to reduce carbon emissions and prepare for the impacts of climate change will be just that, plans and goals. Companies are where the words become actions. And speaking of actions, I think I need to stop in duty free and stock up on some chocolate in case Tim wasn’t kidding.

Climate action heroes Opportunities across Northern ...
Energy
The nanotechnology energy revolution
Sustainability
Does your building have a future?
Sustainability
Unlocking the potential of nature-based solutions in Asia