On my third day at COP 23, I chatted with a climatologist from South Africa, delegates from Tunisia and Senegal, a professor from China, and NGO representatives from California and Peru—and that was just on the commute! Due to the number of attendees, many of us were unable to arrange for accommodations in Bonn, so I stayed in Cologne, 25 km to the north.

I spoke at two sessions on Monday. The first was a discussion on climate adaptation finance in developing nations organized by the Organization for Economic Cooperation and Development (OECD) and the Climate Policy Initiative (CPI). Former UN Climate Change Agency Executive Director Yvo de Boer led representatives from Bangladesh, Kenya, CPI, the Green Climate Fund, the African Development Bank, and the private sector (me) in a panel discussion. Following some opening remarks by OECD Director Jorge Moreira da Silva, Saleemul Haq, from the International Center for Climate Change and Development in Bangladesh, made a point that reminded me climate change is a problem for everyone. He said, “You can be poor and resilient and you can be rich and vulnerable.” Wealth can make climate adaptation easier, but it doesn’t ensure it. We must all work together to be safe and prosperous. 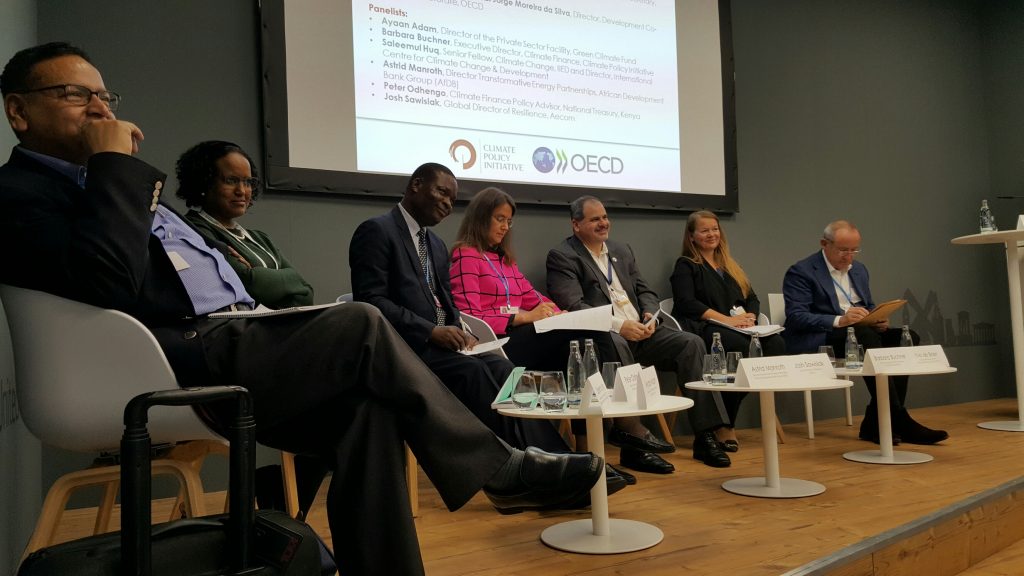 Later in the day, my London AECOM colleagues Emily LeCornu and Lawrence Avery and I (pictured below) co-hosted a climate adaptation event with the World Wildlife Fund (WWF) at their COP pavilion, known as the PandaHub. A WWF official noted that their Panda icon is the second most recognized NGO logo in the world after the Red Cross. I have to admit, seeing the Red Cross logo in a disaster always makes me feel better, but the Panda is a lot more fun. And they have a ginormous one on the side of the pavilion. Not to be outdone during their presidency year, the Fijian pavilion features a native boat, examples of cultural dress and lots of island décor and music. Truly the spirit of Bula has been brought across the ocean by the warm and welcoming people of Fiji. The adaptation event was a big success, and we released a report AECOM just completed with WWF on resilience and sustainability screening of infrastructure projects by international financial institutions. 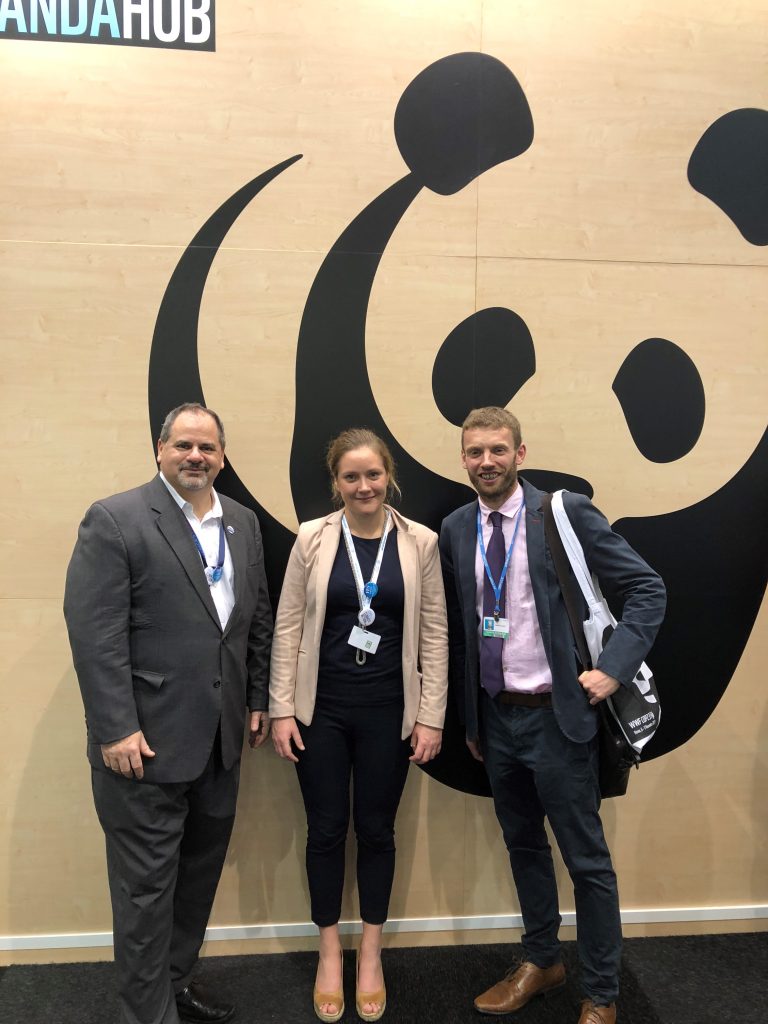 What is very clear to me from all of the sessions I have spoken at and attended is that both climate mitigation (reducing carbon) and adaptation (preparing for the impacts of climate change) are being pursued by governments, NGOs, and companies. More on the corporate involvement in the COP in my next update.

I have seen a lot of old friends and colleagues and met many new ones this week. However, I may have missed my best VIP (pronounced “whip” by the Germans) encounter. As I was sitting in the hallway charging up my phone and responding to some emails, a gaggle of security folks went running by. A few minutes later, a full herd of officials, handlers, press, and the security team came walking down the hall. I couldn’t see who was in the middle, but assumed that some head of state or other minister was making a speech or press conference. Nope. Turns out it was the Terminator himself: Arnold Schwarzenegger was back (sorry, but I can’t pass on a bad pun). I may not have seen Arnold, but it’s clear that all of the scientists, government officials, policy experts, and business leaders here this month are deeply committed to addressing the causes and impacts of climate change, and that makes them all action heroes in my book.