This post is part of a series about the inaugural U.S.-Australian City Exchange on Local Finance Mechanisms presented by the Future Cities Collaborative, an initiative of the United States Studies Centre at the University of Sydney, with the support of New South Wales Trade and Investment and AECOM. The Exchange allows city leaders to examine innovative sustainable development and finance mechanisms.

The day the U.S.-Australian Exchange spent in Dallas kicked off with a presentation that covered the history of Dallas and its entrepreneurial spirit, which has been the cornerstone of the city’s development. As a planning professional who has worked in the Dallas community for more than 20 years, I have seen how business and civic leaders collaborate with local government to facilitate change. For example, the great flood of 1908 spawned the development of the Trinity Floodway System that exists today. Through the business community purchasing and developing the newly protected land, one of the most productive and influential industrial and market areas in the United States was created — with redevelopment along the Trinity River continuing to this day.

The exchange offered me a unique opportunity to not only showcase the work AECOM has completed within the Dallas/Fort Worth (DFW) metropolitan area, but how that work, subsequent development, and the Dallas philanthropic community continue to elevate the quality of life for all residents.

Dallas is the largest urban center of the DFW metropolitan area. The city’s economy, which has diversified over the last thirty years, significantly drives the region’s productivity. DFW is the sixth largest metropolitan economy in the United States, and Dallas is home to the third-largest concentration of Fortune 500 companies, the recently constructed world-class arts district, and the largest light rail system in the country.

Dallas’ multifaceted environment made the city a fitting location for discussions about the exchange’s focus on multi-party partnerships and how philanthropic contributions and cultural precincts can help stimulate, renew and revitalize a city.

The first stop on the tour took us to the offices of Dallas Area Rapid Transit (DART). DART operates more than 90 miles of light rail across the region. Additionally, they provide bus, streetcar, commuter rail and paratransit services. DART is known for its innovative approach to leveraging local dollars to maximize federal funding for its capital expansion projects. DART’s conservative, long-term approach constantly balances its operating costs and liabilities with growth plans, which has resulted in DART being recognized as a successful, fiscally sound model transit agency. AECOM has played an integral role in the development and optimization of DART’s system for more than 20 years.

In 1996, DART opened Mockingbird Station, a world-renowned, urban transit-oriented development that provides a unique concentration of retail, residential and commercial development. Developers and transit professionals from around the world continue to visit Dallas to learn from the success of DART and potentially implement similar projects within their home communities.

Our tour also included a visit to the City of Plano, a suburb of Dallas, to highlight successful redevelopment efforts directly tied to existing light rail service. Through city-based incentives and innovative development strategies, the Downtown Plano Station serves as the foundation on which city planners, investors and developers have built to create livable communities. These types of efforts have resulted in the City of Plano importing more jobs than it exports.

Our final destination highlighted the Dallas Arts District, a multi-venue center for music, opera, theater and dance. AECOM served as the engineer-of-record on the award winning project and collaborated with four Pritzker architects to create the AT&T Performing Arts Center. The Center serves as the heart of the district and was conceived, designed and constructed through the efforts of philanthropic leaders. More than 40 families gave gifts of at least US$1 million to the project.

Klyde Warren Park, a five-acre deck park over a depressed highway, connects the revitalized uptown area to downtown. The green space, which serves as a gateway to the Dallas Arts District, also was conceived and designed by the business community. Funding for this project included philanthropic donations, the City of Dallas, the Texas Department of Transportation and federal stimulus funding. These recent and significant investments in the City’s cultural assets have induced development and created a highly desired location to live, work and play. 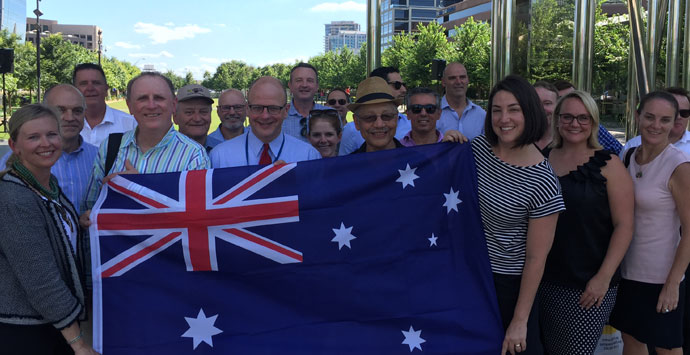 The Australian contingent was impressed with the amount of influence the business and civic community have on growth and development, and the speed at which change can occur. They recognize that public-private partnerships in infrastructure investment can significantly impact all aspects of the community from transportation to arts and culture. Dallas was the third leg of their four-city tour, and it is clear that their enthusiasm will affect positive change in their communities.