Diversity and inclusion means welcoming others

In recognition of International Women’s Day on March 8, and this year’s theme, #BeBoldForChange, we are featuring stories from our leaders and employees throughout the month of March, describing their own bold moments in relation to workplace equality and honoring diversity and inclusion.

What inspires you personally and professionally?

What inspires me is having the opportunity to do something that has a real impact — it’s one of the reasons I enjoy being a lawyer at AECOM. Even though I’m not the one designing or building a project, I’m supporting those who do, and through my contributions, I play a part in the great work we do around the world.

Where does this sense of wanting to have a positive impact come from?

This is a quality instilled in me by my parents. They both spent time in public service and when my dad was younger, he was politically active, so we were always discussing political and social issues in our home.

Tell me about someone who inspires you?

I’m inspired and motivated first and foremost by my family.

When we first moved to the U.S. from Iran, my dad was travelling back and forth for the first five years, and my mom was mostly on her own. She was in a foreign land, raising three girls and still managed to earn a double major with a minor and graduated summa cum laude, with English as her second language. She later owned and managed businesses and held other professional positions. She’s an extremely intelligent, socially conscious and deeply empathetic person. She’s quite a role model to live up to, and I often think, if she could do all of that as a first-generation immigrant, then there are no excuses for me.

My dad is the embodiment of resilience. He’s an eternal optimist whose vocabulary doesn’t include the word “impossible”!

My kids inspire and energize me every day to be the best I can be for them and give back and do what I can to ensure their generation has even more opportunities than ours.

What does being bold for change mean to you?

It means not being afraid to take chances and do things differently and not letting fear of failure stand in your way. You may succeed, or you may not, but having the courage to take the chance is huge.

Ten years ago when I came to AECOM, I was primarily an employment lawyer and really wanted to diversify my practice and professional experience. I joined AECOM as general counsel for one of our operating companies at the time. This was a bold and somewhat risky move for me, as I was leaving my “comfort zone” of employment law. However, the risk paid off, and joining AECOM turned out to be one of the best decisions I’ve made professionally.

To me, being bold also means putting yourself out there, whether through political or social activism or community or pro-bono work. I went to the Women’s March in San Francisco with my teenage son. In that moment, I felt we were both being bold for change. For him, it was interesting to experience an event like that as a teenager. He was amazed by the crowd and inspired by the positive messages and momentum the movement was generating. I was extremely proud of him because he wanted to be there and was genuinely curious and interested in the principles and purpose of the event. 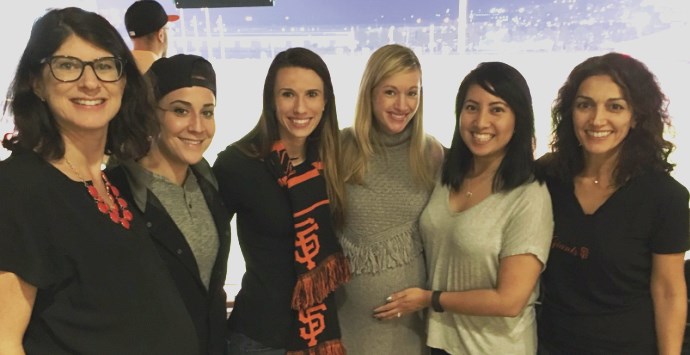 What does diversity and inclusion mean to you?

Diversity and inclusion are not the same, and you can’t successfully have one without the other. Diversity means opening the door wide enough to welcome a broad spectrum of people from different backgrounds and ways of thinking. Inclusion means that once the door is open and people walk in, you create an environment where they can flourish. Often that requires change and applying new and non-traditional methods that resonate with women and men of different generations, cultures and backgrounds.

Flexibility is also a key factor in a healthy workplace and can help promote D+I goals. Paid family leave programs and mentoring programs, among others, are great ways to retain talent and foster a diverse workplace. It’s by supporting the person as a whole that a company can see the greatest return on investment.

What advice would you offer to young women who are just entering the workforce?

Finding a mentor and advocate early on is important; and while you can learn from mentors, you also have to be authentic to who you are. It’s fantastic to be inspired by others, but it can be tempting to simply emulate their approach. You need to find a happy medium of following a mentor’s advice while still being yourself.