More than a bridge

Bridges are of as much interest to the general public as they are to designers and engineers, particularly if they are iconic and notable. Their timeless appearance and monumental size unsurprisingly strike interest and fascination among us all. In the early 1900s the need for transportation infrastructure gave rise to a variety of innovative bridge types; over time construction methods evolved, giving way to a catalog of new bridges. Today bridges come in all forms, some tall, some short, some designed for vehicles alone while others are intended for pedestrians, bicycles and even horses.

The most common bridge that fills our landscape and often goes unnoticed is the conventional concrete vehicular bridge. These are built purely for function and designed to move large volumes of motorists from point A to point B, withstanding high amounts of vibration and structural load. The potential for bridges to become iconic gateways, beacons, and connecting devices between and within towns and cities is often overlooked. Alternatively these monumental structures can be seen not only as bridges but as places – places for connecting people, places for viewing, places for gathering and celebrating. This view provides opportunities to bring new value to existing communities, not only through a piece of infrastructure but through a holistic design approach involving disciplines including architecture, urban design, transportation, engineering, landscape architecture and hydrology. 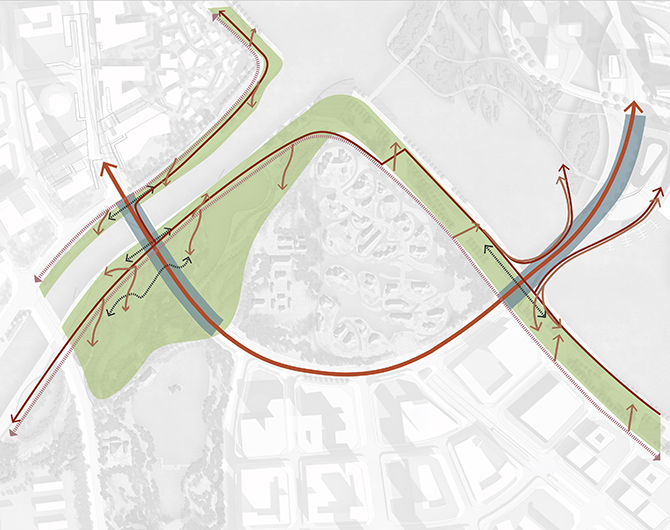 In 2010 AECOM’s Los Angeles Urban Design team completed a waterfront master plan and sustainability guidelines for the city of Tongzhou, China. As a result of the two-year design and planning effort, local city leaders announced an international design competition for two bridges and a waterfront park. After being asked to participate in the competition, our multidisciplinary design approach and methodology was selected. We choose to build on our key concepts established during the master planning stage and leverage these ideas to develop the new landscape and bridge elements. 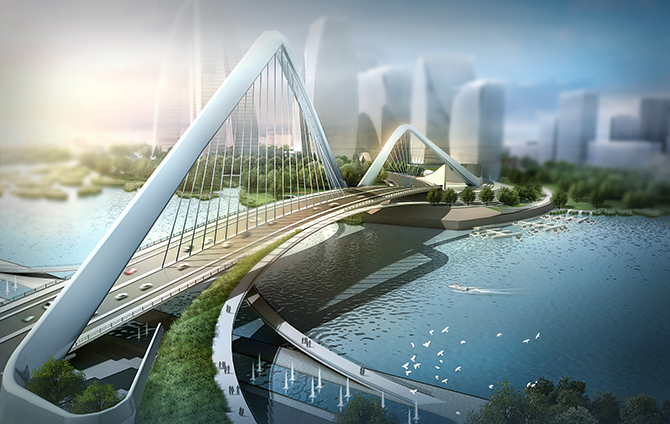 The site is located at the confluence of four rivers; the design calls for two bridges along an arterial loop road connected with a waterfront promenade and park. The key design drivers were pedestrian connectivity and access from the central business district and adjacent neighborhoods to the waterfront for recreational activities. The two bridges include programmed space where the structure meets the landscape; this becomes a transitional space where landscape becomes bridge and buildings become landscape, blurring the lines between the public realm and architectural elements. 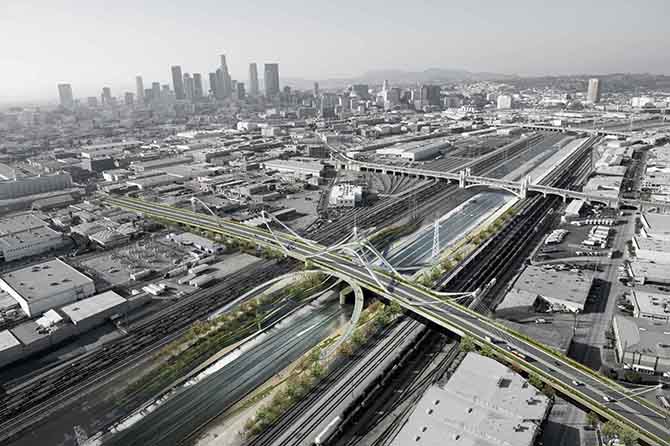 More recently we were shortlisted to one of three design teams for the Sixth Street Viaduct competition in Los Angeles, a highly visible competition that featured some of Los Angeles’s most respected architects. Constructed in 1932, the Sixth Street Viaduct (also known as the Sixth Street Bridge) is an important engineering landmark in the City of Los Angeles.  It is the longest of 14 historic Los Angeles River crossing structures. Located in a densely urbanized area just east of downtown Los Angeles, the bridge is a critical transportation link between the Los Angeles Arts District and Boyle Heights. A 1986 Caltrans bridge survey found it to be eligible for inclusion in the National Register of Historic Places; however the bridge must be replaced due to a form on “concrete cancer” that is rapidly eroding the structure. 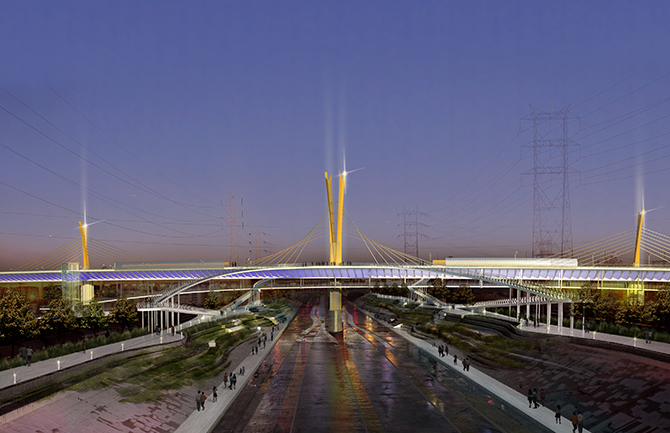 View from 5th Street Bridge over the Los Angeles River: Alternative 1 is a cable stayed bridge with pedestrian ramps to a restored river bank and bike paths.

The new bridge is to span the Los Angeles River as well as multiple rail lines, functioning as a “gateway” to Downtown LA from the east. This multimodal bridge allows for vehicular traffic, bicyclists, and pedestrians with future connections to a restored LA River and future bike paths. The team included AECOM architects, landscape architects, urban designers, computational designers, transportation and structural engineers, all working together to come up with the optimal solution. The design team explored multiple alternatives varying from cable stayed pylons to a modified arched scheme that reflects elements of the old bridge. In addition to the bridge structure, a network of open spaces and plazas were incorporated to improve local pedestrian connectivity and community gathering spaces. We used our parametric design capabilities to help both our team and the interview panel visualize the design. 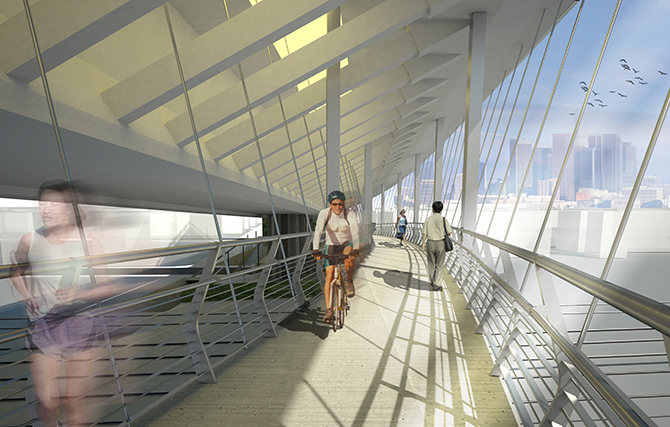 This design effort is ongoing and the team is continuing to explore a variety of structural elements and aesthetics.

What’s next for the living w... Coastal resilience through bio...
advanced modeling
What should Earth Day mean?
Architecture
#CoolJobs: Light links everything
Connected Cities
Urban SOS: towards a new industry