What’s next for the living wall?

There has been a lot of hype surrounding green or living walls in recent years, using plants to create verdant building facades or interior atriums. Increasingly, blank walls and building are being transformed into vertical landscapes, turning dense urban areas from grey to green.  Like all new technologies, however, there have also been spectacular failures, with some unfortunate buildings turning from green to brown as their plants fail and die.  This has led to skepticism among some or the use of expensive custom systems, both responses slowing the uptake of an integrated landscape approach that has huge potential.

Westfield London’s monumental 170 meter / 560 foot long living wall, located in one of Europe’s largest shopping and entertainment complexes, is an example of how when done right these can bring great success to significant commercial developments.  Speaking on the project’s fifth anniversary, the client said: “[The] green wall and landscape are all in excellent and rude health and remain one of the icons of the scheme – a lesson to invest in quality.” This is located on a north-facing wall that receives no direct sun, a tough environment for many plants to grow. Furthermore it leads patrons to the development’s front door, so there was little room for failure. The problem was overcome through the careful selection of native woodland species, which has not only resulted in horticultural success but created an area of wildlife habitat in a very unexpected location. 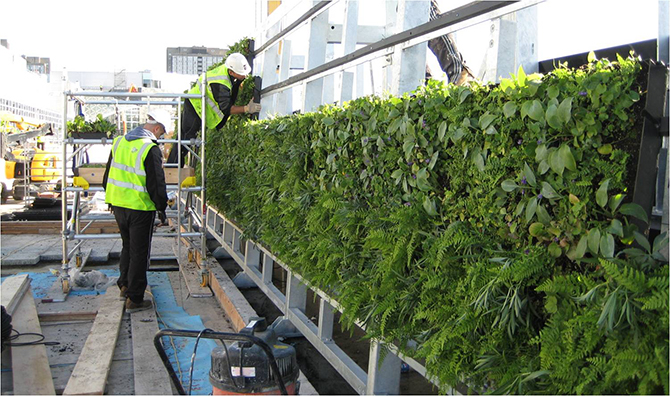 A fast and simple installation, using pre-planted clip-in panels. Photo by the author.

But the living wall does so much more. From the developer’s perspective it creates a dramatic backdrop for an extensive outdoor dining terrace that has thrived during a time of global economic decline. Its seating and water feature also forms a place for people to relax, encouraging shoppers to stay in the development longer. The evapo-transpiration of the living wall also cools the surrounding micro-climate during summer months – a kind of biological air conditioning system. And from the perspective of existing residents living on its opposite side, the plants and their growing media form a pleasing visual and acoustic barrier to the activity beyond. 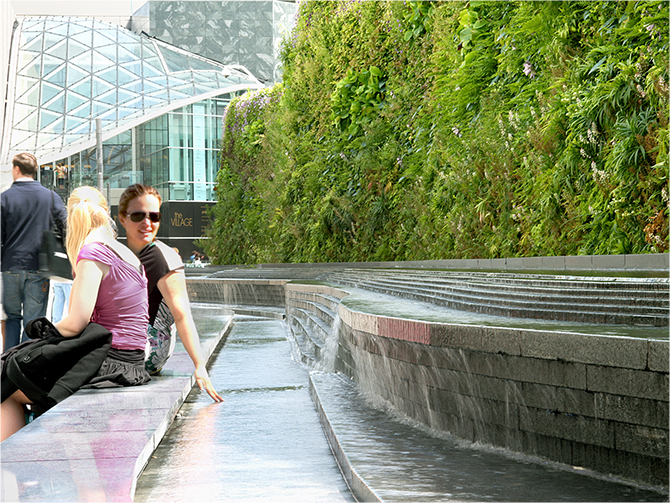 Enjoying the cooling effects of the living wall. © AECOM photo by David Lloyd.

With all this success the question is then “what’s next?” Can living walls do even more? The advent of living walls is fascinating in its own right, with buildings integrating and hosting a piece of nature within their skin. A logical next step is to take full advantage of the potential symbiotic relationships between nature, architecture, and its occupants. Not only learning from nature as is the case with biomimicry but directly using plants to perform some of the services typically undertaken by mechanical systems. Air quality is an example, with NASA research demonstrating the filtration abilities of plants in removing toxins from our built environments. This has the potential to dramatically reduce the energy demands arising from conventional air filtration systems in climates where buildings have either high air heating or cooling loads. It should also not be forgotten that building inhabitants need to eat. With the integration of plants comes the choice of what species to grow, with there being no reason why fruit and vegetable varieties could not be used – air filtration that’s good enough to eat.