Stephen (he, him, his) is an executive vice president, the San Francisco Bay Area executive and the global director of Cities.

What makes a city? Places we live. Places we work. Places we shop and enjoy ourselves. Shared public spaces. The systems that move us from point to point. The systems that deliver water and energy to us. All of this is physical infrastructure of one kind or another. There are also the capital and funding mechanisms that make all of it possible. And there is the governance that makes each piece and the whole function smoothly. All of these things together could be thought of as the urban infrastructure equation.

Right now a range of forces, from new technologies, to environmental change, to demographic shifts, are changing the urban infrastructure equation. Private-sector innovators are offering new options for how we move around the city and to where we need to transport ourselves—new places and types of places to live, work, and play. In the context of climate change and diminishing natural resources, our approach to water and energy generation and distribution and the need to prepare for erratic weather and rising sea levels are also changing. As the global population grows and shifts into cities, increased social inequality worldwide and within any given city further drives a mandate for change.

We are still planning, funding, and governing for the traditional urban infrastructure equation, but technology, the environment, and society are changing very rapidly and thus demanding more infrastructure developed faster while offering a better quality and greater inclusiveness. Looked at with the existing set of tools, this may seem insurmountable: how can we possibly fund and deliver all of the infrastructure that the new global urban population will need in time? What about a different question: how can we change our infrastructure delivery approach to align with the new equation, and what opportunities could this unlock? Who are the new partners that need to be at the table?

As a company that designs, builds, finances, and operates infrastructure worldwide, and a company thinking deeply about what infrastructure is and needs to become in this rapidly changing world, AECOM is engaged in a series of activities exploring this question. 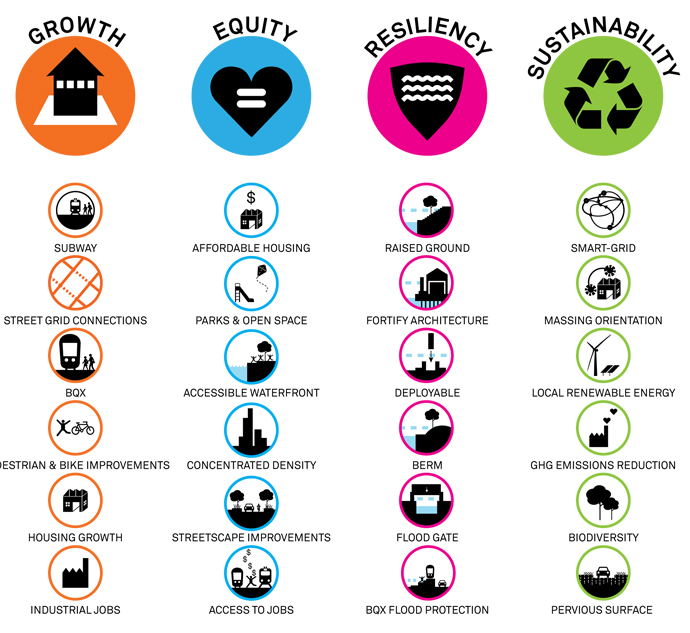 This graphic was developed as part of a study by AECOM of Brooklyn’s waterfront.

Meanwhile, AECOM and Van Alen Institute in partnership with 100 Resilient Cities—Pioneered by the Rockefeller Foundation have launched the seventh Urban SOS competition in 2016, titled Urban SOS: Fair Share. The competition calls on multidisciplinary student teams to apply the tools and technologies of the sharing economy to support more equitable access to resources, improve the built environment and enrich the quality of life of urban residents. As we’re defining them, sharing economy models have two basic things in common: they use digital technology to connect people who have a shared need, and they provide access to resources that aren’t being used. Urban SOS asks students to apply these models to parks, schools, public housing, roads, and any other type of urban infrastructure.

These activities represent the beginnings of dialogues and idea generation. As we work with public and private-sector clients to deliver urban infrastructure around the world, we are ready to put the most promising new ideas into practice in search of new delivery models that align with the new equation.